Alevo is launching a major expansion at its facility in Cabarrus County, creating more than 200 jobs in North Carolina over the next five years. The company plans to invest $251 million at its production operations in Concord.

“It’s exciting that a global company like Alevo chooses to manufacture its cutting-edge energy storage products right here in North Carolina, in the heart of one of our state’s strongest manufacturing regions,” Gov. Roy Cooper said. “We need to continue to recruit and train for 21st-century jobs like these.”

Alevo is part of a Swiss-based group of companies founded in 2009. With operations in the United States and Europe, the company is building its battery manufacturing, GridBank deployment and grid data analytics divisions in North Carolina, creating a global energy storage business for the world’s largest energy companies. The Concord location is the first U.S. manufacturing site to make Alevo’s rechargeable GridBank lithium-ion battery storage system. Alevo currently has 215 full-time employees in Concord. 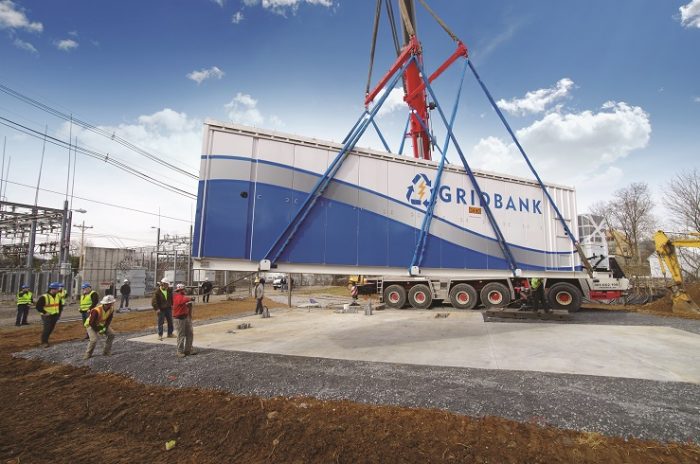 Alevo reached a giant milestone in January 2017 when it delivered its first GridBank energy storage system to the Snook Substation in Hagerstown, Maryland. Photo courtesy of Alevo

“This latest period of expansion is another significant milestone for Alevo,” said Per Dybwad, Aleva chief executive officer and director. “As we continue to ramp up production, this phase of investment will be used to source the best possible engineering and manufacturing talent as we look to fill, test and ship our Alevo GridBanks around the world.”

Alevo will hire manufacturing, engineering, maintenance, logistics, supply chain, and other employees. Salaries will vary by position, but the annual compensation of the company’s new jobs will average $56,327. Cabarrus County’s overall average wage is $37,808 per year.

A state Job Development Investment Grant (JDIG) is supporting the Alevo expansion. Under the JDIG terms, the company is eligible to receive up to $2,638,000 in total reimbursements. Payments will occur in annual installments over 12 years pending verification by N.C. Commerce and N.C. Revenue that the company has met incremental job creation and investment targets. JDIGs reimburse new and expanding companies a portion of the newly created tax-base with the goal of increasing the overall revenue benefit to the state of North Carolina.

By law, JDIG projects must result in a net revenue inflow to the state treasury over the life of the award. For projects in Cabarrus and other Tier 3 counties, 25 percent of the eligible grant is directed to the state’s Industrial Development Fund – Utility Account to help finance economic infrastructure in rural counties. Alevo’s expansion could provide as much as $879,000 in new funds for the Utility Account.