Business Link NC: A Look at Two of 23,000 Cases of Supporting Entrepreneurs

When Doug Watson decided he wanted to leave a 20-plus year career as a corporate accountant to open a small shop and tasting room selling fine olive oils, balsamic vinegars, spices and gourmet foods in downtown Marion, he had a few questions.

He wanted to know the licensing requirements for this first-of-its-kind store in Marion, a town of 7,800 people in rural McDowell County. He also needed to know the rules for selling raw milk cheese and for repackaging olive oils and spices for sale. Watson reached out to Business Link North Carolina, EDPNC’s team of small business counselors. 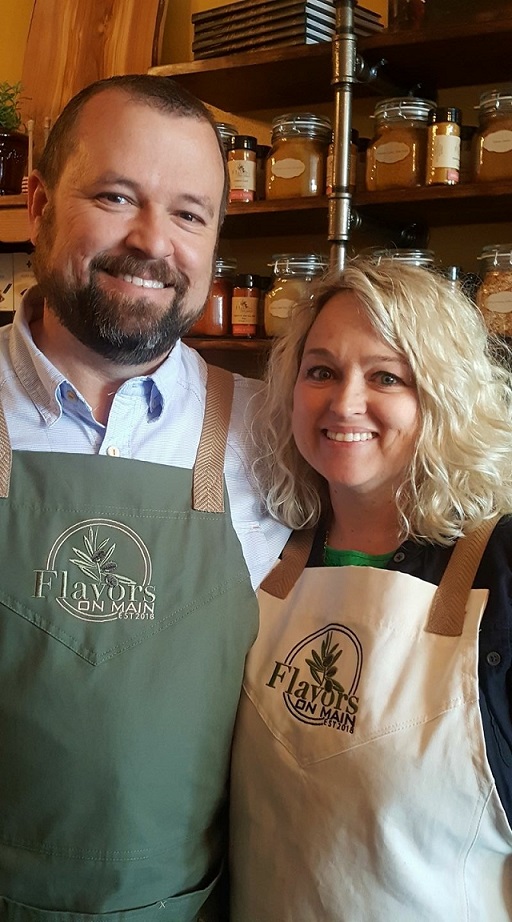 Doug and Debbie Watson own Flavors on Main in Marion.

“The raw milk cheese question was a first for me, so I had to do some digging on that one,” said Stephanie Arndt, the BLNC counselor who assisted Watson. “I provided Doug some information there, as well as a checklist on the steps needed to register his business in the state, most of which he had already completed.”

Watson and his wife, Debbie, opened Flavors on Main in April 2018, just two months after first reaching out to BLNC. “On a scale of 1 to 10, I’d give Stephanie a 10,” Watson said.

Flavors on Main is one of 23,043 cases supported by BLNC counselors in 2018, and nearly half those cases originated in rural counties. Through website inquiries and their toll-free number, (800) 228-8443, BLNC counselors offer free one-on-one consultations in English and Spanish, providing customized license and permit information and access to necessary forms. In 2018, 77 percent of the cases BLNC supported involved startups such as Flavors on Main.

“BLNC gave us a really comprehensive list of what we needed to have regarding licensing, but I was most interested in the laws regarding packaging items and what’s required on labeling,” Watson said. “We buy olive oils in bulk and fill bottles out of that, and we also buy spices in bulk and repackage them.”

With the help of the BLNC team, Doug and Debbie Watson’s store fulfills a dream for a couple raised in McDowell County but whose careers led them elsewhere for many years.

“Most of my corporate career was in the Charlotte area, at Ingersoll Rand,” Watson said. “Debbie went to UNCW, moved to New York City and did off-Broadway theater for a few years, worked for a small accounting firm in the Connecticut and New York area. She has a marketing and business degree and teaches high school and business classes.”

Another startup assisted by BLNC in 2018 is hoping for similar success, but this one in providing parents and preschoolers a special place to play and connect in Asheville.

In 2019, Kelli Conover opened her Preschooler’s Playroom inside a 5,000-square-foot space on Charlotte Street. Earlier, Holly Yanker, BLNC team leader, had provided Conover information on topics including registering her business as a limited liability company and understanding state sales and use taxes. Yanker also referred Conover to the Small Business Center at Asheville-Buncombe Technical Community College, which has helped the entrepreneur locate a tax adviser and learn how to market her business.

“Holly was amazing,” Conover said. “She broke down the permitting steps so they weren’t overwhelming.”

For parents, who must remain onsite with their children, “I’m offering a place where they can interact with their kids or other parents, or simply watch their children explore and play while they connect to Wi-Fi, or have some downtime and a free cup of coffee.”