Ethan Allen’s furniture plant and its 385 employees are a big presence in tiny Old Fort, North Carolina, with a population of 900 and change.

The plant, located 30 miles east of Asheville, has operated in rural McDowell County since 1972, navigating the tough years of 2000- 2010 when many other “case goods” plants making nonupholstered wooden furniture closed or moved production offshore. 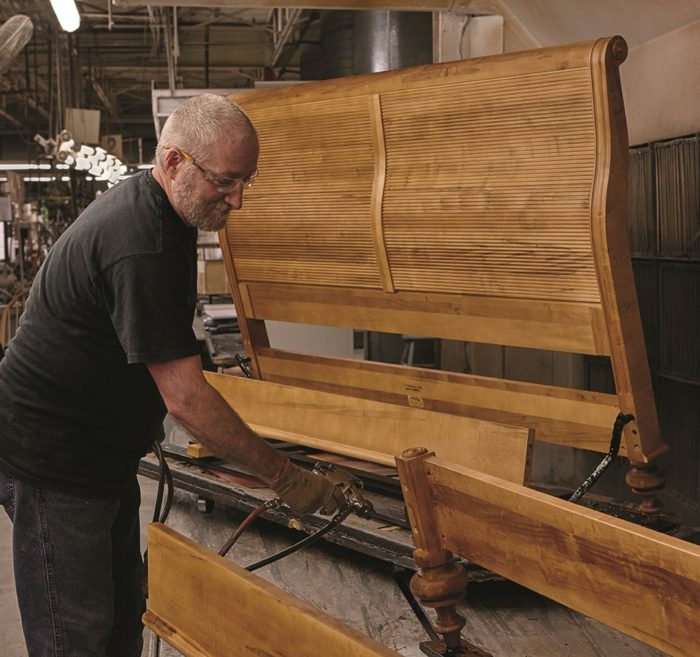 Andy Mahan, who has worked at Ethan Allen’s plant in Old Fort for 13 years, sprays toner on a piece of furniture. Photo courtesy of Ethan Allen

Plant Manager Larry Papula is proud of his facility, which produces wooden furniture in 60 different finishes for Ethan Allen. The well-known interior design and home furnishings company sells its furnishings online and through a network of 300 design centers.

But in early 2017, Papula was looking for ways to solve the problem of the plant’s dated boiler system. The solution ended up being a state grant that will allow the company to upgrade the boiler, expand production and create 16 new jobs at the plant.

Slagle and Abernathy first approached Papula in early March 2017, at a monthly meeting of the county’s Workforce Pipeline Committee. At Pipeline meetings, supervisors of up to a dozen manufacturing plants in the county discuss their workforce needs with representatives of local and state organizations that can help.

“Both these guys came over and said, ‘What’s going on at your plant?’ ” Papula recalled. “So, I went through investments we’d made here, and our commitment by corporate directives to maintain domestic manufacturing.” Indeed, 70 percent of Ethan Allen’s production remains at its North American plants.

Slagle and Abernathy asked Papula: “What are your biggest issues? Maybe we could help you somehow.”

Less than two weeks later, both men were in Papula’s office discussing the plant’s boiler.

The roughly 35-foot-high steam boiler “is absolutely critical to the operation of furniture manufacturing in the plant,” Papula said. “It is a wood-fired boiler, so it’s reusing what would be a waste product. It generates steam that dries the lumber that we purchase, and that steam also runs our finishing oven so we can dry finishes on our furniture. We also use it to keep our employees warm during the winter.”

Slagle and Abernathy suggested that a state Building Reuse Program grant, administered by the North Carolina Rural Infrastructure Authority, could help offset the $400,000 cost of updating the plant’s boiler system and building a new control room – but only if the project could meet the grant program requirement of creating new jobs. 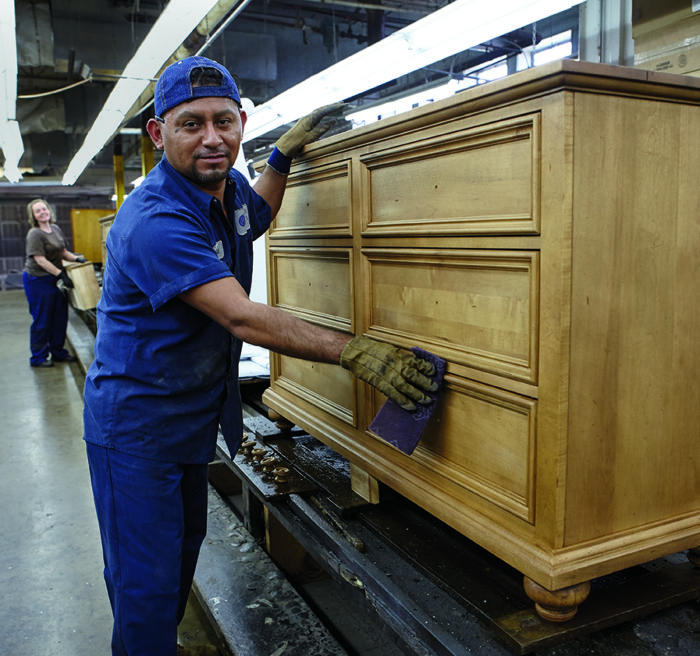 David Salas, who has worked at the Ethan Allen plant for 14 years, makes sure color is uniform after staining. Photo courtesy of Ethan Allen

That’s how a boiler issue became an opportunity for a plant expansion.

The new control room and upgrades to the boiler controls, wiring and piping will produce more reliable steam for all plant purposes, create a safer environment for the boiler room operator, and result in a more-efficient burn that will help support the plant’s continued compliance with air quality standards. The possibility of accomplishing all that with state assistance made the Old Fort location an attractive option for an expansion that might otherwise have gone elsewhere among Ethan Allen’s plants.

The $195,462 grant awarded to McDowell County to support the project obligates Ethan Allen to hire 16 new employees within two years or return the money. Papula expects to have the new positions filled within a year.

“With the state being willing to invest, we consider that a good partnership,” Papula said. “Bill and Chuck did a great job, and I’m looking forward to working with them through the balance of this project and seeing what other ones may come down the road.”

Papula also praised the McDowell County Workforce Pipeline Committee, where his discussion with Slagle and Abernathy began. “This Pipeline is really, really good, between the industry and government involvement,” Papula said. “The local community college, even the high school participates. I think it’s exciting that they’re looking to find ways to get everybody talking, because we are all looking for the same thing – security in our lives. And a lot of that starts with having a good job and a good place to live.”