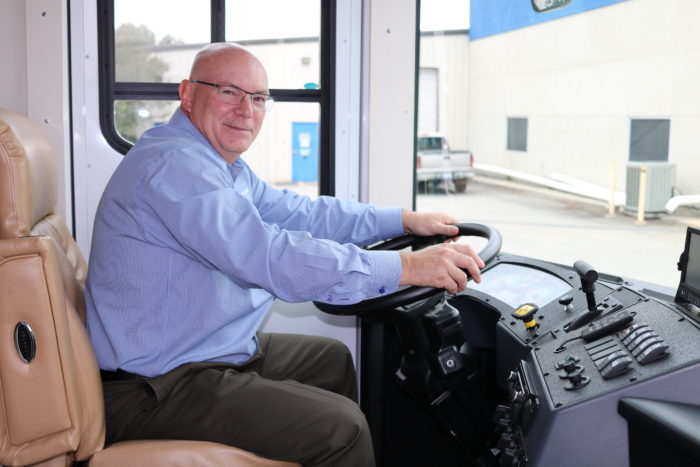 Dennis Hoag behind the wheel of a bloodmobile at Matthews Specialty Vehicles in Greensboro.

You don’t have to be a gearhead to appreciate how well Greensboro-based Matthews Specialty Vehicles can customize your ride.

Matthews, founded in 1992, precisely designs, engineers and builds these “offices on wheels” mounted atop bus and motorhome chassis from manufacturers such as Thomas Built, Freightliner, Ford and Chevrolet.

Matthews-made bodies and interiors accommodate staff and space for labs, exams, conference areas and more. “We have our own electricians, cabinet makers, metal fabrication and carpenters,” Global Sales Director Dennis Hoag said. “We pride ourselves on custom-building every vehicle and doing everything inhouse.”

That approach has made the company of 60 employees, not including its spinoff custom van and vehicle graphics division, a success. “Over the last five years, we’ve had 30 to 50 percent growth in sales,” Hoag said.

Recent sales in the Middle East are part of that growth, and Hoag is committed to increasing exports of Matthews’ mobile medical vehicles to the region. To help tap into that promising market, Matthews partnered with the Economic Development Partnership of North Carolina, the U.S. Commercial Service’s Greensboro office and the Small Business and Technology Development Center (SBTDC) office in Winston-Salem. 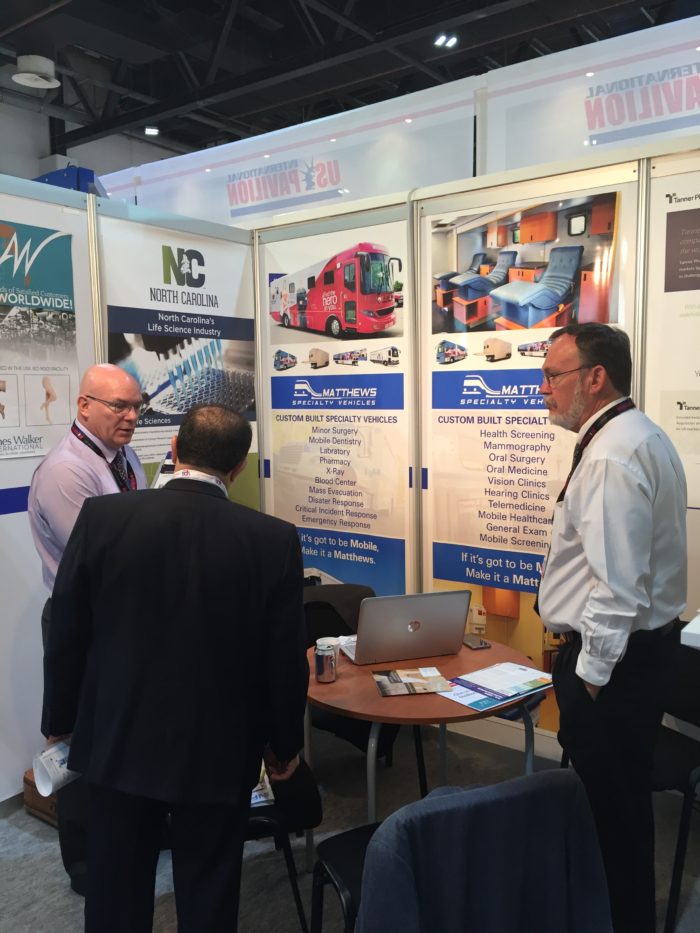 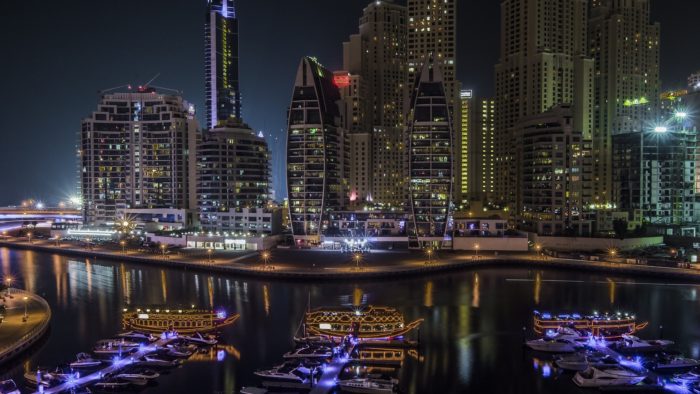 A skyline scene in Dubai, the site of key trade shows opening doors to Middle East markets. How promising is the market? In 2016, Saudi Arabia surpassed Japan to become North Carolina’s fourth-largest export market in overall value of goods sold. In inflation-adjusted totals, Saudi Arabia purchased $1.68 billion in goods exported from North Carolina in 2016, a 106 percent increase over five years.

Exports account for roughly 10 percent of Matthews’ sales. “My goal is to grow export sales by 50 percent in the next three years,” Hoag said. “That might be in [vehicle] units or dollar amounts, because every unit counts.”

How much, for instance, can a single bloodmobile count? Well, that depends. One bloodmobile with backup generators might start at $300,000, Hoag said, while another that also has slide-out room extensions could sell for $450,000 to $500,000.

Hoag attended his first Middle East trade show in 2013, exhibiting with other small businesses at the North Carolina booth at Intersec, a leading trade fair for security, safety and fire protection in Dubai, United Arab Emirates (UAE). Working with Kuldip Wasson, who was then an international trade manager with the North Carolina Department Commerce, the company received federal funds to help pay its travel costs connected with the show.

After Intersec, Hoag decided to shift his attention to Arab Health in Dubai, the largest health-care conference and trade show in the Middle East. “I wanted to focus more on our medical, health and bloodmobile market for export purposes. Intersec gets more into security and military apparatus. That’s not our focus.”

So Wasson, currently an international trade manager with the EDPNC, connected Hoag with EDPNC International Trade Manager Paul Wyatt, who supports companies exhibiting in the state booth at Arab Health.

During the 2106 Arab Health show, where Matthews shared space with other North Carolina companies at the state booth, Hoag met one on-one with U.S. Commercial Service officers based in Saudi Arabia and the UAE.

“It was a learning experience,” Hoag said. “You meet with them to understand each country’s specific needs, and how they recommend doing business in each country.”

“I got a lot of strong recommendations in those meetings,” Hoag added. “I told them what our business model was, what we were after. They were upfront about whether their country would be a great fit.”

Since that show, local and overseas U.S. Commercial Service specialists have helped Matthews vet potential foreign agents for its products. “They’ve made sure that we’re talking to legitimate people,” Hoag said.

Critical introductions were also part of Arab Health in 2017, where Matthews decided to exhibit more prominently at its own booth and collected 32 new business leads. Hoag also attended a trade show VIP reception where he met Middle East ambassadors. “Those types of things are invaluable,” he said.

In addition to exhibiting at Arab Health, Matthews employees have participated in a variety of export education and compliance workshops presented by the EDPNC.

Matthews’ export successes have included bloodmobile deals with Aramco, the national oil company of Saudi Arabia, and a pending contract with King Khalid University Hospital in the Saudi capital of Riyadh.

”We’re also investing in an office in the Middle East to see where it takes us,” Hoag said.

Have exports contributed to new hires at the company in recent years?

“Absolutely,” said Hoag, who appreciates the assistance he has received from the EDPNC, U.S. Commercial Service and the SBTDC. “It’s nice to know the help is out there. When you’re going into another country, it gives you a head start.”

To learn more about how we can assist your company in exporting to markets around the world, email EDPNC International Trade Director Mike Hubbard.