It’s difficult enough to comply with all the legalities of establishing a new business in North Carolina, but particularly so if you can’t get those precise requirements explained in your first language.

That’s one reason why the Economic Development Partnership of North Carolina (EDPNC), partnering with the Mexican Consulate in Raleigh and the Raleigh-based nonprofit Carolina Small Business Development Fund, held five small-business workshops targeting Latino entrepreneurs in 2017. The two-hour workshops across the state were conducted entirely in Spanish. 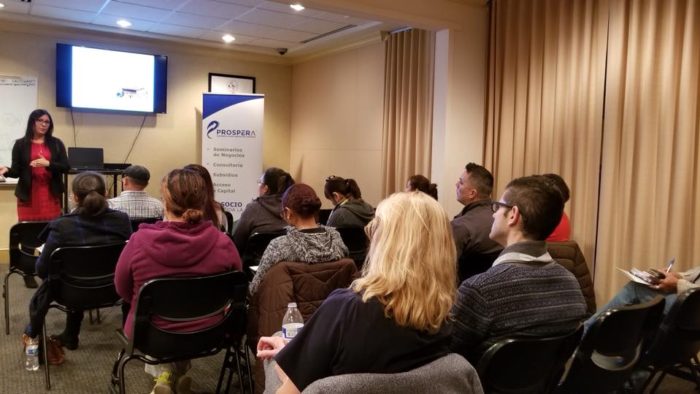 The workshops, part of an EDPNC pilot program, drew 113 participants. The events were held from June to December – twice in Charlotte and once in Siler City, Greenville and Hickory. The pilot was so successful, the Mexican Consulate arranged two more workshops in Raleigh and Wilmington in late 2017. And the three partners plan to present six more Latino small-business workshops in 2018.

Those who attended the pilot workshops represented a mix of fluencies in English and Spanish. But even those most at ease with English often prefer Spanish when discussing the exacting specifics of how to legally register a business in North Carolina, obtain a permit, or qualify for a business loan.

“So there was a huge need to do this in Spanish,” said Zurilma Anuel, Latino program director, Carolina Small Business Development Fund. “This has been one of the program’s most successful events.”

The workshop partnership began to form in 2016, when Remedios Gomez Arnau, head of the Mexican Consulate covering North and South Carolina, contacted the EDPNC. She was exploring ways to better support entrepreneurs among the state’s Mexican and Mexican-American residents, who make up 60 percent of the North Carolina’s nearly 900,000 Latinos.

“When I arrived in Raleigh [in June 2016], I realized that there were few organizations reaching out to the Latino community, even though Latinos are 10 percent of the state’s population,” Gomez Arnau said. “So we contacted different organizations about the programs they already have, and how to include Latinos.”

The EDPNC’s team of small-business counselors at Business Link North Carolina (BLNC) had experience presenting workshops for veterans and women, minorities and rural entrepreneurs. So, it made sense to extend that outreach in Spanish to Latino startups.

“After meeting with the Mexican Consul General, we brought in the Carolina Small Business Development Fund as our third partner, knowing they have existing business loan products and Spanish-speaking staff,” said John Loyack, EDPNC vice president of Global Business Services and supervisor of the BLNC team.

At the workshops, each partner organization made 20-minute presentations, leaving time for remarks by host-city organizations, such as local economic development officials. 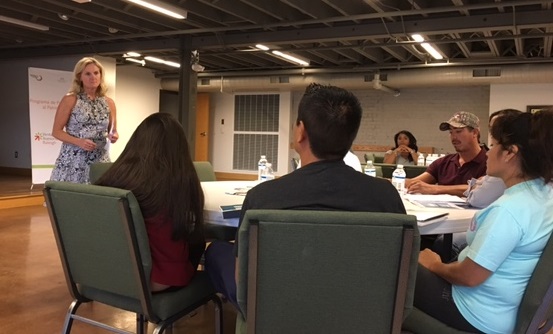 Holly Yanker, BLNC team manager who is fluent in Spanish, opens a workshops with information about the legal requirements and process of licensing, permitting and beginning a business in North Carolina.

Holly Yanker, BLNC team manager who is fluent in Spanish, opened the workshops with information about the legal requirements and process of licensing, permitting and beginning a business in North Carolina.

Carolina Small Business Development Fund representatives discussed business-plan essentials, including estimating variable costs and unit price, projecting cash flow, and conducting a break-even analysis. The organization, which provides business loans in underserved communities, also covered its lending programs. “We don’t compete with the banks,” Anuel said. “The people we are giving business loans to are those who cannot get one approved by a regular financial institution.”

The consulate presented financial guidance for Mexican-Americans in the audience, such as how to open a bank account in Mexico without having to leave the U.S. and how to collect pensions earned when they worked in Mexico.

Isidro Nolasco and his cousin own Queen City Fleets, a Charlotte-based startup that maintains and repairs diesel truck fleets. Both attended the first workshop held in Charlotte.

“I was in the process of applying for a business loan, and I learned a few things that turned out to be useful,” said Nolasco, an accountant from the Dominican Republic.

In addition, he and his cousin met an attendee who explained in Spanish the licensing required to offer commercial truck inspections as part of the startup’s services. “My cousin is the one with the mechanical knowledge, but he doesn’t speak much English,” Nolasco said. “He was able to understand everything that was explained to us, and that was important.”