North Carolina again ranks as the nation’s best state for manufacturing, according to an annual report conducted by the location advisory firm Site Selection Group. 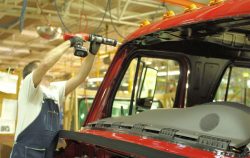 The company, based in Dallas, Texas, scores and ranks all 50 states based on weighted factors that drive location decisions. Workforce availability is the most heavily weighted (at 35 percent), followed by logistics, tax climate, utility costs, labor costs (all at 15 percent) and union climate (at 5 percent).

The top 10 states in the ranking, in descending order, are: