The 1,200-job expansion is one of the state’s 10 largest economic development projects in a decade, Gov. Roy Cooper said at a news conference today. Credit Suisse, one of the world’s leading financial services providers, currently employs roughly 1,500 people at its Research Triangle Park and Morrisville offices in Wake County.

“Credit Suisse has enjoyed a strong presence in North Carolina for more than a decade, and they’ve flourished here,” Cooper said. “We’re encouraged that this commitment to North Carolina will bring high-paying jobs and spur economic development across our state.” 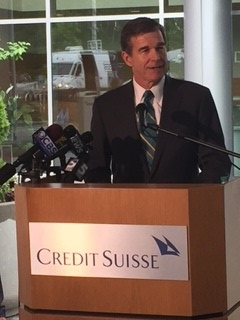 “Credit Suisse is just the kind of financial services company with an international footprint needing a broad talent base that creators envisioned for Research Triangle Park,” said North Carolina Commerce Secretary Anthony M. Copeland. “With its location between our three flagship universities and unparalleled quality of life, companies like Credit Suisse thrive here.”  Commerce and the Economic Development Partnership of North Carolina led the state’s support for the company’s expansion.

Credit Suisse will bring a variety of jobs to North Carolina, including IT, finance, and other critical corporate functions. Salaries will vary by position, but the total compensation of the 1,200 new jobs in Raleigh is expected to represent more than $100 million per year over the next 10 years. The average wage in Wake County is $53,783.

“Over the past decade, Credit Suisse Raleigh has become an important and effective center supporting our U.S. businesses,” said Eric Varvel, president and CEO of Credit Suisse USA. “We have had a long commitment to North Carolina, our people and their families in the Raleigh community, and we pride ourselves on fostering a truly inclusive and high-quality work environment for our employees here and around the world.”

Credit Suisse’s expansion in Wake County will be facilitated, in part, by a Job Development Investment Grant (JDIG) approved by the state’s Economic Investment Committee earlier today. Under the terms of the JDIG, the company is eligible to receive up to $40.2 million in total reimbursements. Payments will occur in annual installments over 12 years pending verification by the state departments of Commerce and Revenue that the company has met incremental job creation and investment targets. JDIGs reimburse new and expanding companies a portion of the newly created tax-base while still increasing the overall revenue benefit to the state of North Carolina.

By law, JDIG projects must result in a net revenue inflow to the state treasury over the life of the award. For projects in Wake and other Tier 3 counties, 25 percent of the eligible grant is directed to the state’s Industrial Development Fund – Utility Account to help finance economic infrastructure in rural counties. The Credit Suisse expansion could provide as much as $13.4 million in new funds to help rural areas through the Utility Account.