Fibertex Personal Care, a Danish textile company, is placing its first U.S. manufacturing facility in Asheboro, North Carolina, where it will create 145 jobs and invest $115 million in a state-of-the art plant focused on producing nonwoven fabrics with prints.

“Fibertex Personal Care could go anywhere in the world, but they chose North Carolina,” said state Gov. Roy Cooper. “Our state’s workforce and leadership in manufacturing and textiles brought this company here.”

“The print production in Germany and Malaysia is to cover the European and the Asian markets, respectively,” he added, “while the coming factory in the U.S. is to cover the markets in North and South America. We expect strong growth rates within this niche in the coming years and, therefore, the American factory has to be operational by the end of 2018.” 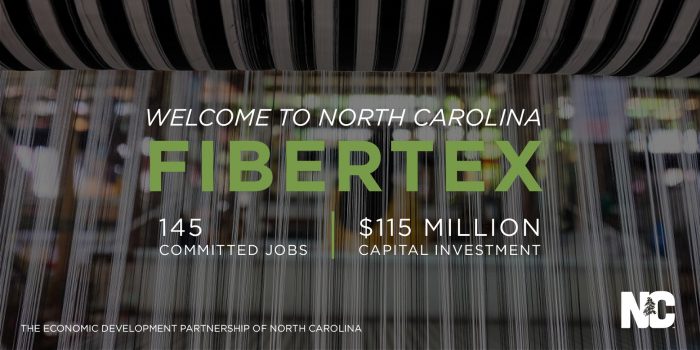 The new jobs being created will include administrative personnel and technical workers. The average salary is expected to exceed $40,000 once all positions are filled. The average pay in Randolph County is $33,974.

The project is supported by a state Job Development Investment Grant. Over the five-year term of this grant, the project will grow the state’s economy by an estimated $327 million. Using a formula that considers the new tax revenues generated by the new jobs, the JDIG will reimburse the company up to  $1,966,500 spread over 12 years, if the company meets its job creation and investment targets.