With recent and significant changes to North Carolina’s corporate taxes and state incentives, wouldn’t it be handy to have a two-page overview to slip inside your business attache or computer case?

Our team here at the Economic Development Partnership of North Carolina compiled an overview of state taxes and incentives, including some key updates for site consultants and corporate decision makers looking for the best place to locate or expand a company.

The measures join other steps state lawmakers have taken to make North Carolina’s tax climate and incentives even more attractive to businesses, particularly large-scale, high-employment manufacturers such as an automotive assembly plant. 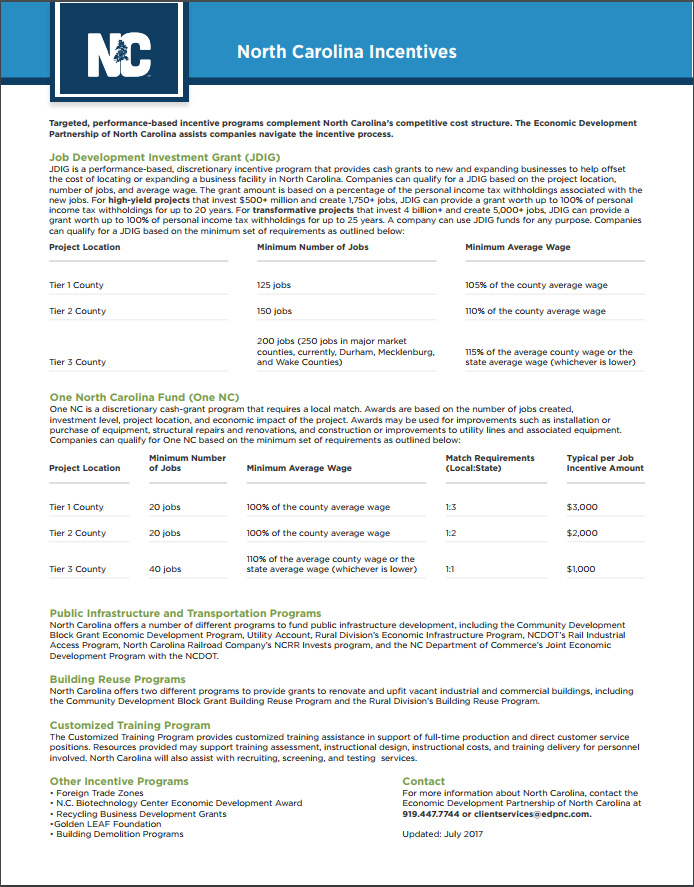 Two years ago, the state increased funding available from its flagship incentive program, the Job Development Investment Grant (JDIG). As part of those changes, companies that invest at least $500 million in the state and create at least 1,750 jobs can receive a grant worth up to 100 percent of the personal income tax withholdings associated with the new jobs ‒ for up to 20 years vs. the typical 12 years.

In 2017, lawmakers approved a budget provision that allows larger incentive packages for companies that invest more than $4 billion and create at least 5,000 jobs in North Carolina. Such “transformative” projects will not be subject to the state’s cap on JDIG awards. They can also receive grants that reimburse up to 100 percent of the personal income tax withholdings associated with new jobs for up to 25 years.

And in 2018, the state is taking another significant step to support manufacturers, by fully implementing single sales factor apportionment for multistate corporations. Effective Jan. 1, the state will determine how much of a corporation’s income is subject to state tax based solely on its revenue from North Carolina sales. It will no longer factor in a company’s property and payroll in the state.

The single sales factor approach encourages corporate expansion and job creation because it doesn’t penalize companies for hiring or investing in facilities.

Download an overview of North Carolina taxes and incentives.