There aren’t many billboard ads in rural Mitchell County, nestled in the High Country of North Carolina’s Blue Ridge Mountains. So the one raised this summer in the small town and county seat of Bakersville gets noticed.

The group of Mitchell County high school students pictured on the billboard tell passing motorists “something big” is coming this fall.

What is it? A grassroots awareness-raising campaign meant to keep young people from assuming they have to leave this rural area to land a good job or start their career. 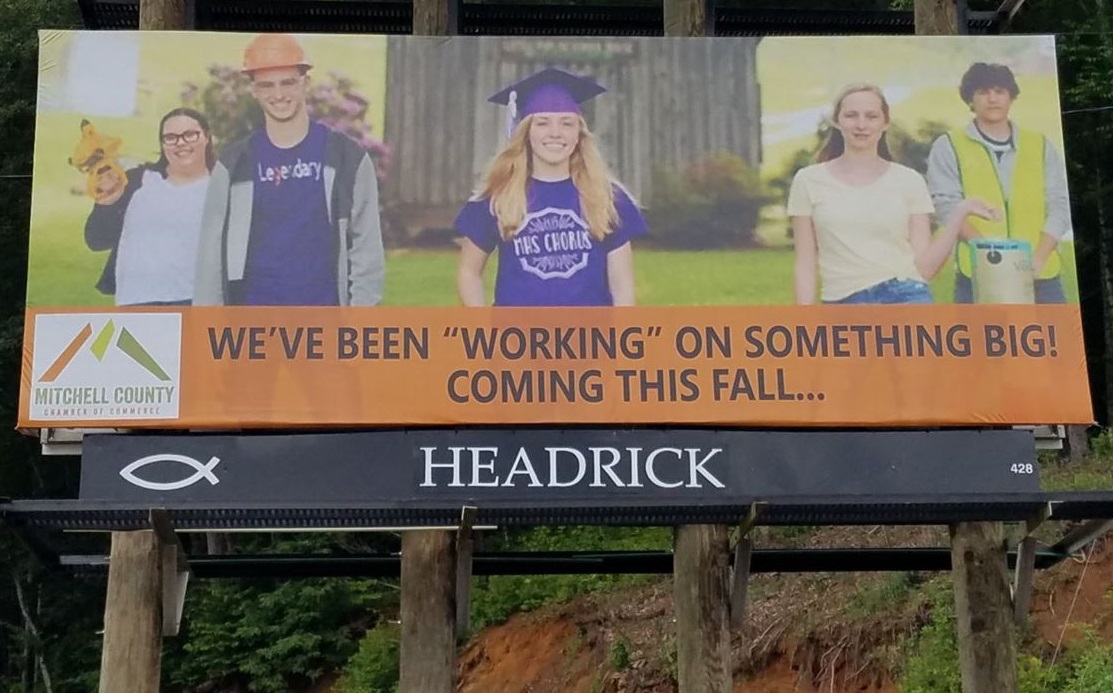 The campaign’s name, selected by local students, will be revealed this fall. That’s when the Mitchell County Chamber of Commerce and community partners launch a new website to support the local workforce pipeline. Visitors will be able to explore the types of jobs employers often need to fill in Mitchell County ― particularly in manufacturing, health care and the skilled trades. Local resources for the required training, certifications or degrees will also be prominently featured, as well as videos highlighting successful young employees of local companies.

The website is the heart of a broader campaign to build awareness among middle- to high-school students of career opportunities in a county where employers sometimes struggle to fill open positions. Many of these jobs don’t require a traditional four-year degree.

“Rural counties have seen young people leave for cities because they think it’s necessary to find good jobs,” said Bill Slagle, who supports existing business growth in 12 northwest counties on behalf of the Economic Development Partnership of North Carolina (EDPNC). “But that’s often wrong. It’s really a stigma left from the early 2000s, when so many furniture and textile plants closed in the region. Mitchell County alone, which now has about 15,000 people, lost more than 2,000 jobs then.”

Slagle, a Spruce Pine resident who served 21 years on the Mitchell County commission, is thrilled to have helped start the talks that led to the new county workforce project.

Patti Jensen, director of the Mitchell County Chamber of Commerce, remembers the first key conversation. “In March 2018, Bill was in my office and I mentioned we were hearing from employers about the availability of skilled workers to fill open positions and their concerns about the workforce pipeline five to 10 years down the road. Bill told me about the Work in Burke campaign to build awareness of job opportunities in Burke County, and he connected me with Sara Chester who oversees that program.”

Jensen has since met several times with Chester, a project manager with Burke Development Inc., the local economic development organization spearheading Work in Burke and its website. Work in Burke, launched in 2017 and supported by a network of community partners, quickly became the model for Mitchell County’s new educational campaign promoting local career opportunities.

“The website is an important part of Work in Burke,” Chester said. “We also help support awareness-raising events in the local schools, student and teacher tours of local industries, engineering camps and more. Work in Burke banners are hanging in every school.” 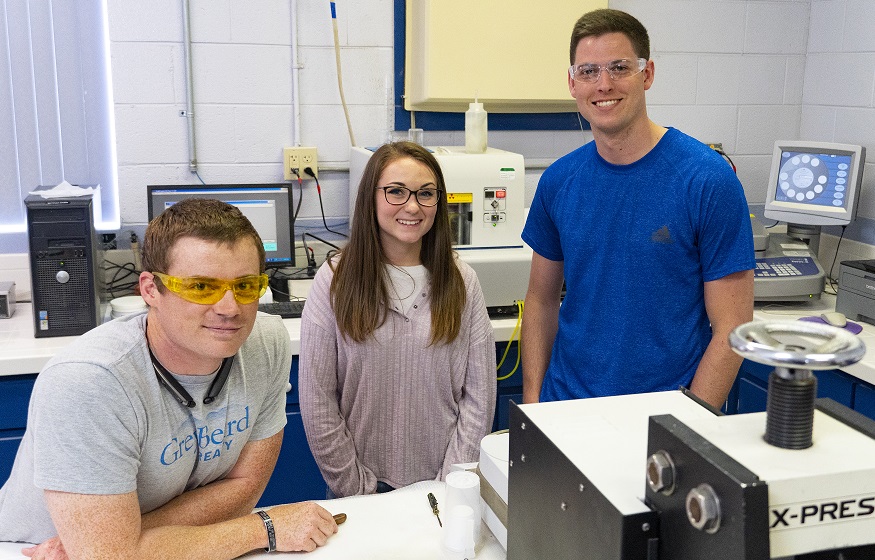 Slagle also connected Jensen to the regional High Country Workforce Development Board in Boone and the state Department of Commerce’s NCWorks division, to discuss whether the Mitchell County workforce project might qualify for an NCWorks grant administered by the board.

“One of the important things about Bill, as our local EDPNC representative, is that he knows us well,” Jensen said. “Bill can look at the whole state landscape for economic development support and find solutions within that can work for Mitchell and the other counties that he serves.” 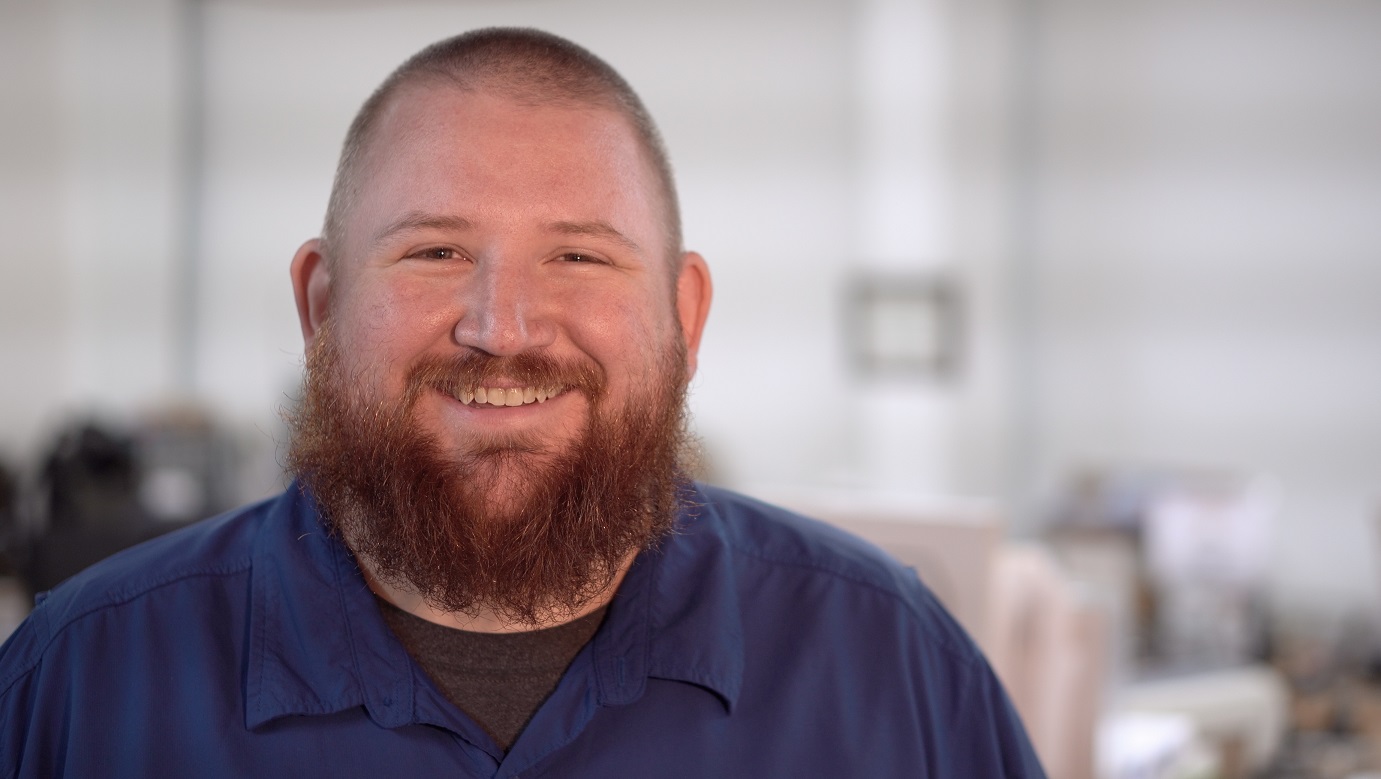 Matthew McGee, who grew up in Mitchell County, has risen from technician to vice president of engineering at McManus Microwave in Bakersville.

One video highlights Matthew McGee, 34, vice president of engineering at McManus. McGee started there as a technician 12 years ago, immediately after graduating from Mayland Community College with degrees in computer and electrical engineering.

“At technical and vocational schools you often get hands-on training versus just something out of a book or a simulation, and that really prepares you for the workforce,” said McGee, who once assumed he’d have to head to Charlotte or Knoxville, Tennessee, to begin his career.

He says he is happy to have remained in the county where he was raised, and now has a wife, two children, regular dinners with extended family and rewarding work.

About the author: Mary Wilson is communications manager at the Economic Development Partnership of North Carolina.