More than 20 years ago, Chris Anderson began making rope sandals and selling them out of the back of his 1969 VW bus while traveling across the United States. This was the start of his Fayetteville-based business Nomadic State of Mind.

“I had no idea I would be sitting here with a global business 20 years later,” Anderson said.

His company, which specializes in handcrafted sandals, now also sells a variety of rope-art products, ranging from handbags to water-bottle carriers. 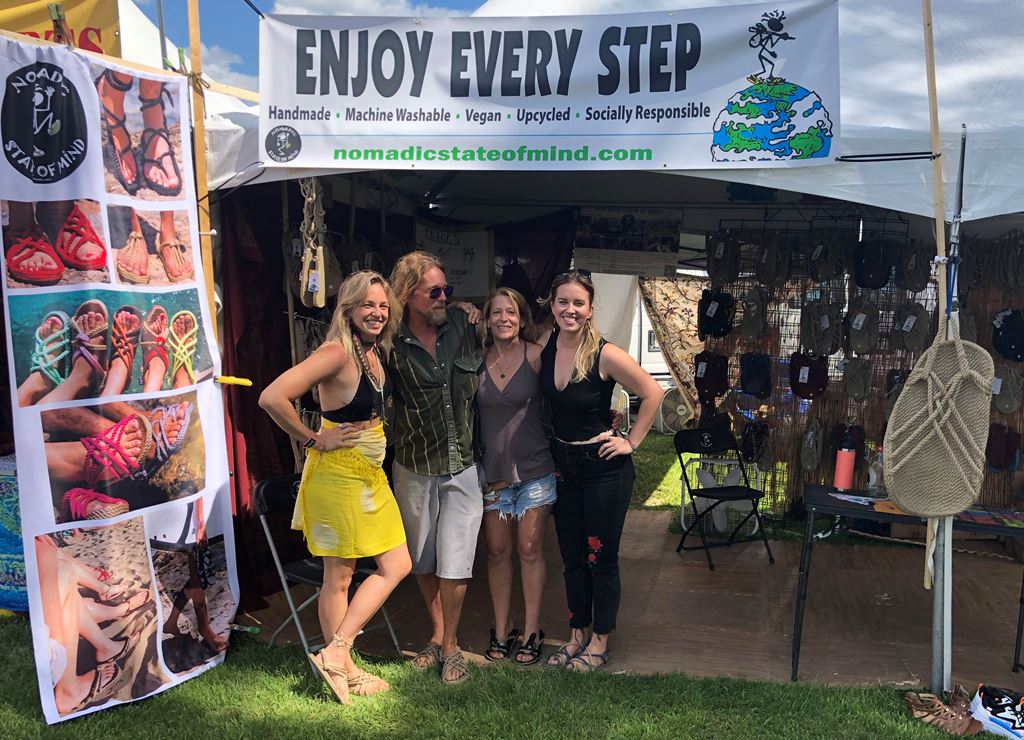 Chris Anderson (second from left) and members of his team displaying Nomadic State of Mind handcrafted sandals at the Bonnaroo Music and Arts Festival in Tennessee.

Since 2017, the international trade team at the Economic Development Partnership of North Carolina (EDPNC) has helped Anderson expand his global reach by enabling him to participate in key international trade shows. Those shows have allowed him to build strong relationships with distributors and grow his global sales, including entering diverse markets in countries such as Japan and Croatia.

Anderson’s journey into business started after he earned a degree in social work. He wanted to put into practice what he had learned about fair labor and environmental responsibility.

When traveling in Nicaragua in the early 2000s, Anderson met many people who were without work, so he taught some of them how to make his sandals. Today, Nomadic State of Mind employs Nicaraguan artisans producing his distinctive footwear.

Three years ago, Anderson moved his company’s packing and shipping operation out of his father’s garage and into a new distribution center in Fayetteville, where 10 people are now employed. A North Carolina company makes the rope for the sandals, which enables Anderson to “keep an eye on production” and ensure the rope is both high-quality and environmentally friendly. An employee in Wilmington applies the soles.

For the past three years, the EDPNC has helped Anderson fund the travel costs of hosting his own booth at fashion-focused European trade shows. The grants came through the State Trade Expansion Program (STEP), a U.S. Small Business Administration program administered in North Carolina by the EDPNC.

Anderson was able to exhibit at a leading fashion trade show for women in France in both 2017 and 2018 and at an international fashion trade event in Greece in 2019.

“Without the EDPNC I would have not been able to go to so many trade shows internationally,” Anderson said. “STEP is a great program for building export business and making it reachable for small companies.”

Since he first started working with the EDPNC, Anderson says his international sales have increased by 50 percent.

Anderson singles out the support he has received from two EDPNC employees ― STEP grant manager Jen Vogelsberg and Glenn Jackman, senior international trade manager. “They have been very instrumental in showing me the ropes and helping my company in every way they can,” Anderson said.

Jackman, who has worked with Anderson for several years, specializes in assisting exporters in the state’s textile industry. He connects businesses to services ranging from trade show funding and export finance assistance to market intelligence and introductions to international distributors.

“It’s crucial for even the smallest of businesses to export and diversify their markets to ensure their success and growth,” Jackman said. “STEP grants are only one way we help them do that.”

In 2018, the EDPNC assisted nearly 600 North Carolina businesses in a variety of ways, including trade show support, and those companies reported nearly $1 billion in sales as a result.

Are you a North Carolina business owner who wants our help with international sales? Then email EDPNC International Trade Manager Mike Hubbard at mike.hubbard@edpnc.com. Click here for more information about our international trade support.