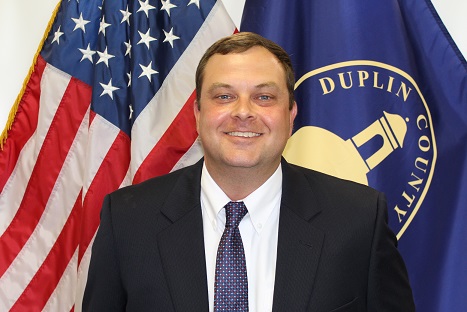 “It’s been a privilege to lead Duplin County’s economic development efforts for the past eight years, and it is a strong foundation for the regional work I’ll be doing,” Wolfe said. “I’m excited to be a part of the EDPNC and having an even broader impact in helping to grow this part of North Carolina.”

Wolfe will be the state’s point person for existing industry support in the Southeast zone, working with local businesses to help identify and solve issues that stand in the way of their growth. The state divides its 100 counties into eight regional zones, where it deploys resources to assist individuals and companies in areas ranging from industry support and workforce development to transportation and environmental issues.

Wolfe, who grew up and lives in the small town of Calypso in Duplin County, has been the county’s economic development director since 2011. His achievements there include helping to recruit a $22-million, 50-job expansion by United States Cold Storage in Warsaw. He also worked to secure a $3 million state grant that helped poultry processor House of Raeford rebuild its Wallace operation after a 2017 fire.

“He will be doing that type of thing and more on a regional level for the EDPNC,” said John Loyack, vice president of global business services for the EDPNC, which performs a variety of economic development functions on the state’s behalf. “His deep knowledge of Southeast North Carolina, including its rural communities, is a great asset.”

The EDPNC has eight existing industry expansions managers, each of whom lives and works within their respective zones. They help local businesses solve problems that cost them in efficiency or revenue, better positioning them to grow. They also coordinate local and state program support when these companies are ready to launch expansions.

“We want these businesses to personally know who to call when they need state support,” Loyack said. “We’re the gateway to a variety of critical programs supporting local industry success, and ultimately the ability to create new jobs.”