U.S. Commerce Secretary Wilbur Ross presented the annual “E” Awards to businesses and organizations in a ceremony at the nation’s capital. In a letter congratulating the partnership, Ross said the EDPNC’s “achievements have undoubtedly contributed to national export expansion efforts that support the U.S. economy and create American jobs.” 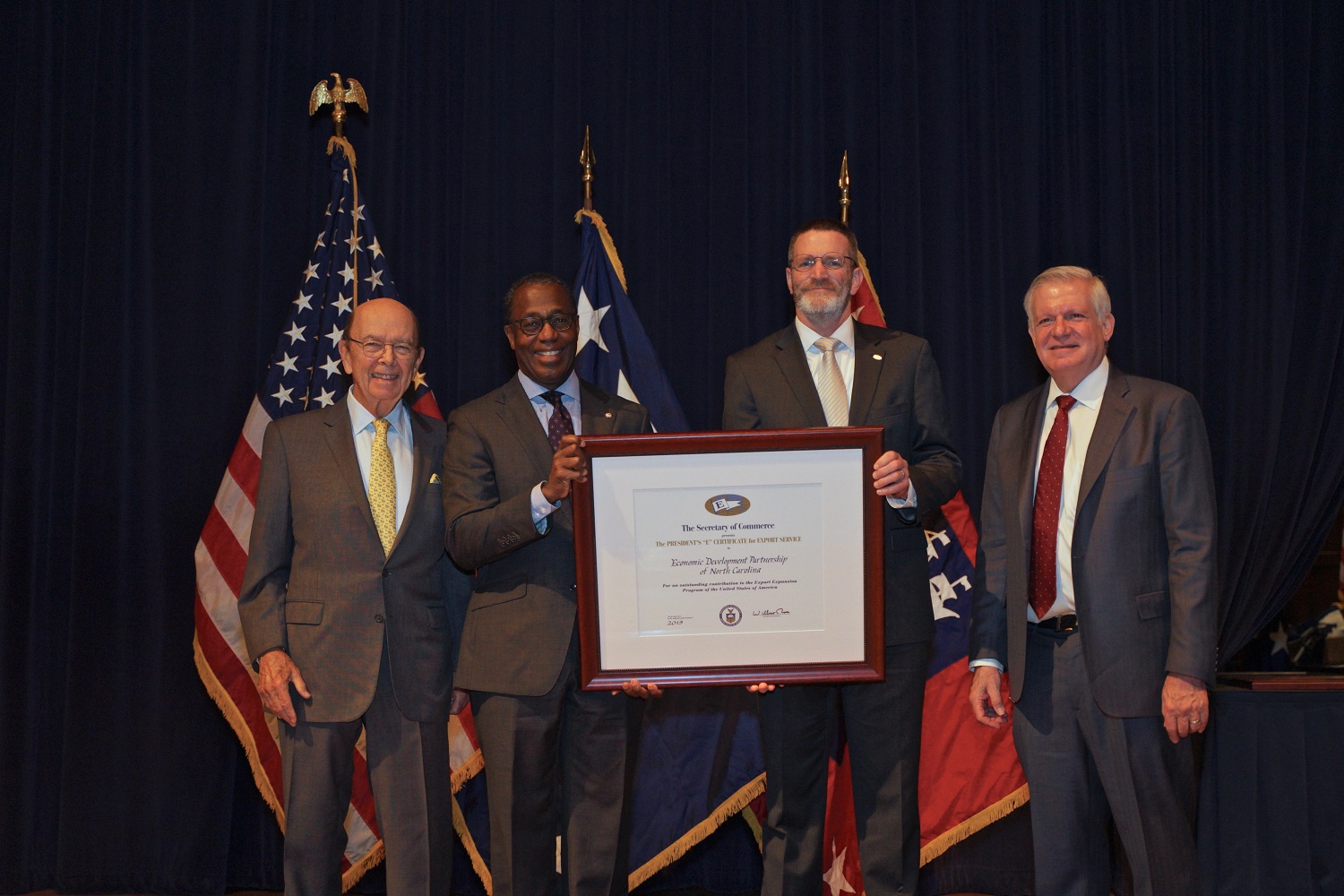 The EDPNC performs export promotion and other economic development functions on behalf of the state of North Carolina. Its free exporting services help North Carolina businesses sell their goods and services in markets around the world.

The EDPNC directly serves North Carolina businesses while being their entry point to a strong network of state and federal resources that help them expand into new international markets.

“Businesses that export have much greater growth potential and are more likely to create new jobs,” said John Loyack, EDPNC vice president for global business services. “That’s what makes our work so rewarding, and this national recognition so special.”

PEMMCO Manufacturing in Asheboro, for example, says international sales growth supported by the EDPNC is one reason the company launched a plant expansion that is adding 20 new jobs to PEMMCO’s current 90-person workforce. Among other support, the EDPNC helped PEMMCO secure a federal grant to offset its costs to participate in the Aircraft Interiors Expo in Hamburg.

“We’re now selling our parts to a European multinational manufacturer of aircraft seating we met at the Aircraft Interiors Expo in Hamburg two years ago, and that is absolutely part of why we’re growing,” said Rick Powell, president of the precision-machining company that serves the aerospace, automotive and other industries. “The EDPNC’s support is extremely helpful for a small company like us.”

In 2018, the EDPNC assisted 592 North Carolina businesses in 94 counties with exporting, including helping more than 140 companies participate in 32 international trade shows or events in 16 countries.

Those nearly 600 businesses reported $958 million in foreign sales in 2018 connected to EDPNC support. That’s almost a 30 percent increase over export value reported by EDPNC clients in 2015, when the EDPNC assisted 514 businesses with $739.8 million in international sales.

“Increasing the number of companies whose export efforts are improved by the EDPNC is important,” Emory said. “But equally important is ensuring that its existing clients become more sophisticated about and effective at exporting North Carolina goods across the world.”

The nonprofit EDPNC, which operates under contract with the North Carolina Department of Commerce, provides export education workshops, market-entry research and strategies, trade show support, introductions to distributors and buyers and more. These customized services are coordinated by EDPNC staff based in North Carolina as well as offices in Canada, Mexico, Japan, Hong Kong, Great Britain and the United Arab Emirates.

North Carolina businesses can connect to a variety of free resources to help them increase their foreign sales. For more information, contact EDPNC International Trade Director Mike Hubbard at 919.447.7757 or mike.hubbard@edpnc.com.