Energizing Rural NC: A New EDPNC Board Initiative in 2018

An employee who works a 12-hour first, second or third shift in a rural North Carolina manufacturing plant often finds it difficult to show at a doctor’s office between 8 a.m. and 5 p.m.

So that same worker may suffer health issues that invite absenteeism, poor productivity and even despair. And if a rural community has many residents struggling with poor health outcomes, the local economy suffers.

Such connections between rural health and economic outcomes were explored as part of a summer 2018 conference, “Energizing Rural North Carolina: The Building Blocks of Successful Economic Development,” which was spearheaded by the EDPNC’s board of directors. 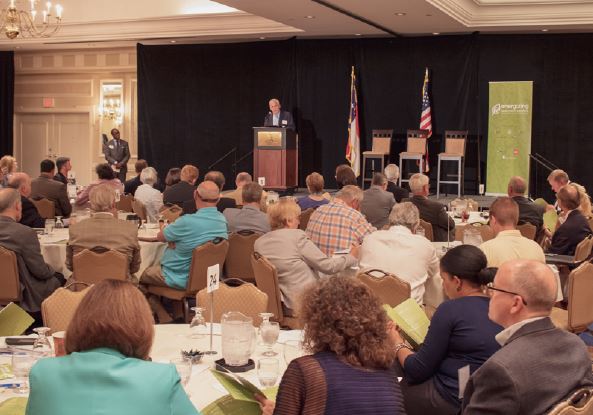 Byrd’s presentation was one of many at the two-day conference meant to inspire attendees to identify and pursue local strategies to bolster five pillars of rural prosperity — infrastructure, workforce, education, health and local leadership.

“The event emphasized ways to help move the needle in small towns and rural communities, whether they’re in the farthest corners of the state or near major metro areas,” said Mike Hawkins, head of the EDPNC board’s rural working group, which coordinated the conference. “It’s important to understand why rural communities, each with their own assets and challenges, need to have some combination of these five building blocks in place before they can have meaningful job creation.”

For example, Roanoke Electric Cooperative explained a project that will provide high-speed internet infrastructure to seven underserved rural northeastern North Carolina counties. The Rutherford County Schools system outlined how it is providing a tablet or laptop to each of its 8,500 students – as the digital learning component of a broader strategy to improve the rural county’s K-12 educational outcomes.

The Wilson Academy of Applied Technology discussed its partnership with local manufacturers that created a public high school centered on advanced manufacturing. As the school begins producing tech-adept graduates, it will help local employers grow their own workforce.

The EDPNC also brought in national speaker Andrew M. Davis. He shared insights from his book “Town INC.,” based on his travels to 54 U.S. towns and cities to discover why some prosper while others struggle.

Successful communities identify what is already unique to them and working, then they market it, Davis said. They also tap “visionaries in their midst,” he said, such as YouTube star Jenny Doan, whose quilting startup has helped revitalize rural Hamilton, Missouri, by turning into a quilting mecca.

Surveyed attendees gave the conference an average satisfaction rating of 4.7 out of a possible 5.

“We got a ton out of the Energizing Rural NC event,” said David Jackson, president and chief executive officer of the Boone Area Chamber of Commerce. “So we thought, ‘What if we did that with a focus on northwest North Carolina and the way things work in our region?’ ”

Meanwhile, the EDPNC is planning another event in 2019, this time focusing on the single building block of rural workforce development.