A Prescient Move: Construction Software Firm Relocates Base from Denver Area to Durham

Prescient, which provides a fully integrated and patented software design, engineering and manufacturing solution for the construction industry, is moving the company’s headquarters from Arvada, Colorado, to Durham, North Carolina, after recently opening a second manufacturing facility in nearby Mebane.

Prescient, established in 2012, provides technology that speeds up the process of of building a multistory residential structure, from design to manufacturing. The company uses design software to create pre-fabricated components and framing that construction crews install and assemble at the building site. The company recently raised $40 million in venture capital, as demand for its patented structural system and processes has grown, according to a Denver Post article. 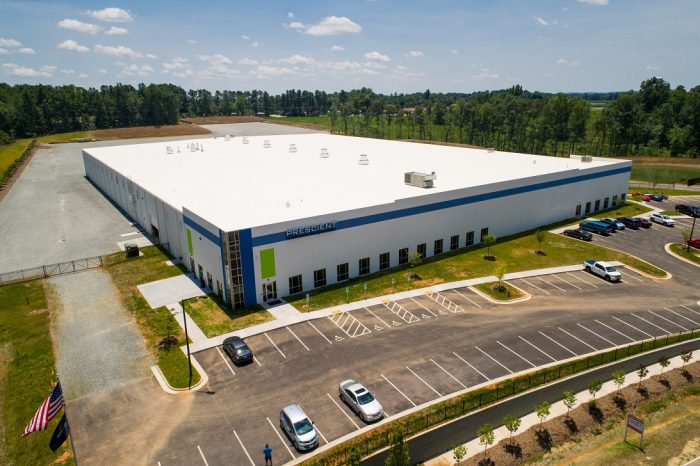 In May 2017, Prescient began operations at its new manufacturing facility in Mebane, North Carolina. Two months later, the company announced it was relocating its corporate headquarters from Arvada, Colorado, just outside Denver, to Durham, North Carolina. Photo courtesy of Prescient, Co.

Prescient’s Mebane plant began production in May and expects to eventually employ more than 200 designers, architects, project managers, installers and other employees, according to a company news release. The Mebane facility doubles the company’s total annual capacity to nearly 11 million square feet.

The corporate headquarters move — to 115 N. Duke St. in Durham — marks an important milestone, signaling Prescient’s commitment to future investment and growth throughout the U.S., the company said. This also allows Prescient to bring design, manufacturing and other business operations to the North Carolina Commerce Park, a 1,200-acre business property developed collaboratively by Alamance County with the towns of Graham and Mebane.

“We are witnessing significant growth, having doubled our revenue each year since 2013. Relocating our headquarters will allow us to expand our national footprint and better accommodate customers along the East Coast, from Maine to Miami,” said Satyen Patel, chairman and former CEO of Prescient. “While our expanded 120,000-square-foot facility in Colorado will continue to serve customers west of the Mississippi River, we believe that North Carolina, with its commitment to growing a knowledge-based, innovation-driven economy, is a perfect fit with Prescient’s mission.”

The company provides the architecture, engineering and construction industry with a seamless process tied together with a digital thread from design to the finished product. Prescient says its  innovative design platform offers a faster, greener and more cost-effective alternative than conventional building structures and is ideally suited for multi-unit, mid-rise projects, including apartments, student housing, hotels and senior living. The company has projects completed or underway throughout the country in Colorado, Florida, Georgia, Illinois, Indiana, Kansas, Kentucky, Missouri, Nebraska, New York, North Carolina, Oklahoma and Texas.

“I am proud to welcome Prescient to North Carolina. Prescient joins a growing list of innovative companies attracted to our state’s exceptional talent and business climate,” said North Carolina Governor Roy Cooper. “North Carolina is a thriving place to live and do business thanks to our skilled workforce, outstanding universities and community colleges, and strong leadership in technology and manufacturing.”

The first project coming out of the new Alamance County facility in North Carolina will be Northgate, a student housing facility in College Station, Texas. The 177,267 square-foot dormitory will consist of eight total levels, five of Prescient structure. For additional information about Prescient, please visit the company’s website.