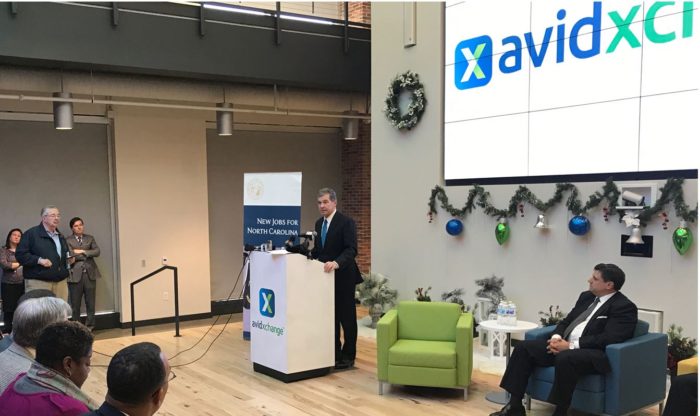 AvidXchange provides cloud-based software that simplifies the way companies pay their bills.  The company automates the end-to-end payment process for midmarket companies spanning multiple industries including real estate, community association management, construction, financial services, and energy, among others.  AvidXchange has been recognized as the top midsize company of the year by the North Carolina Technology Association and was ranked among Deloitte’s Fast 500 list of companies earlier this year.

“We launched AvidXchange 18 years ago in a coffee shop in Charlotte with five employees. Since then, we’ve grown to 1200 employees, proud to call North Carolina home,” said AvidXchange CEO Michael Praeger. “I’m thrilled to have the state’s continued support as we look to double our employee base in the next five years.”

The North Carolina Department of Commerce and the Economic Development Partnership of North Carolina led the state’s support for the company’s expansion.

AvidXchange will add a variety of positions with this expansion, including software development, financial, marketing, and professional services personnel.  Salaries for the new positions will average $68,569, which is higher than the current Mecklenburg County average wage of $65,285.

AvidXchange’ s headquarters expansion will be supported in part, by a Job Development Investment Grant (JDIG). Over the course of the 12-year term of this grant, the project will grow the state’s economy by an estimated $2.6 billion. Using a formula that takes into account the new tax revenues generated by the new jobs, the JDIG agreement authorizes the potential reimbursement to the company of up to $19,614,000, spread over 12 years. State payments only occur after the company has met its incremental job creation and investment targets.

Because AvidXchange chose to expand in Mecklenburg County, classified by the state’s economic tier system as Tier 3, the company’s JDIG agreement also calls for moving as much as $6.5 million into the state’s Industrial Development Fund – Utility Account.  The Utility Account helps rural communities finance necessary infrastructure upgrades to attract future business.  Even when new jobs are created in a Tier 3 county such as Mecklenburg, the new tax revenue generated through JDIG grants helps more economically challenged communities elsewhere in the state.  More information on the state’s economic tier designations is available here.