GE Aviation Adding 146 N.C. Jobs as It Ramps Up Production of Cutting-Edge Components

The global manufacturer of aircraft engines and components will invest nearly $105 million in the expansion. The Asheville plant, which opened in 2014, was one of the first in the world to mass produce CMC components for the record-selling CFM LEAP and other commercial jet engines. The ultra-lightweight components are one-third the weight of the metal parts they replace, while handing temperatures more than 500 degrees hotter, which means better jet performance and lower costs. 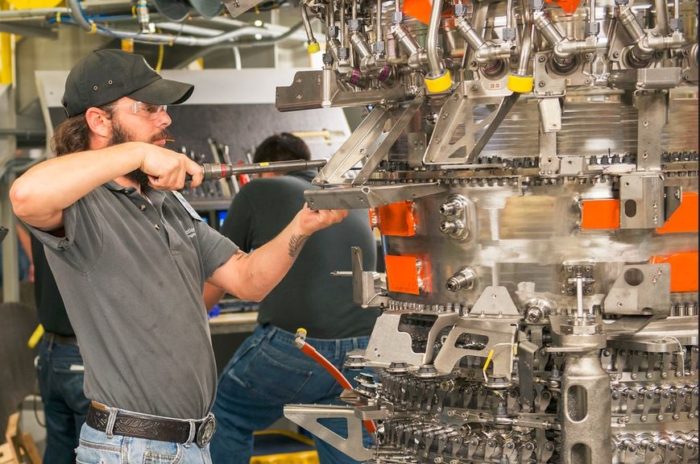 “North Carolina welcomes innovators who drive our economy forward,” Gov. Roy Cooper said. “GE Aviation and their North Carolina employees have a long history of accomplishment in our state, and this expansion will put even more people to work building the next generation of innovative products for the aerospace industry.”

GE Aviation’s Asheville plant in Buncombe County and West Jefferson plant in Ashe County are part of the company’s aviation supply chain. Of the 146 new positions, 131 will be in Asheville and 15 in West Jefferson. GE Aviation currently employs more than 1,700 people in North Carolina.

“We are very pleased to continue expanding our GE Aviation business in Asheville,” said Michael Meguiar, Asheville plant leader. “We continue to build on a great workforce, culture and community that supports advanced manufacturing jobs in Western North Carolina. This merging of technology and a strong, creative workforce is the foundation of our success. Our site continues to grow as we win components for our next generation of engines such as the GE9X and the CFM LEAP. I’m very proud of the technology advances and the continued competitiveness that our teams have been able to demonstrate.”

“The companies that know North Carolina best are the ones already doing business in our state,” said North Carolina Commerce Secretary Anthony M. Copeland. “GE Aviation’s vote of confidence with this decision confirms once again that North Carolina offers innovative companies all the ingredients they need for success in today’s competitive marketplace.”

The North Carolina Department of Commerce and the Economic Development Partnership of North Carolina were instrumental in supporting the company’s expansion decision.

A performance-based grant of $558,700 from the One North Carolina Fund will help facilitate GE Aviation’s expansion in North Carolina. The One N.C. Fund provides financial assistance to local governments to help attract economic investment and to create jobs. Companies receive no money upfront and must meet job creation and capital investment targets to qualify for payment. All One NC grants require a matching grant from local governments and any award is contingent upon that condition being met.

Read more about the important role North Carolina is playing in GE Aviation’s transformation of the commercial jet industry.