In North Carolina economic development circles, there’s only one moment more exciting than announcing a deal that will bring a new plant to a rural county.

It’s when the plant opens and begins hiring – especially if more than 1,000 new jobs are involved. 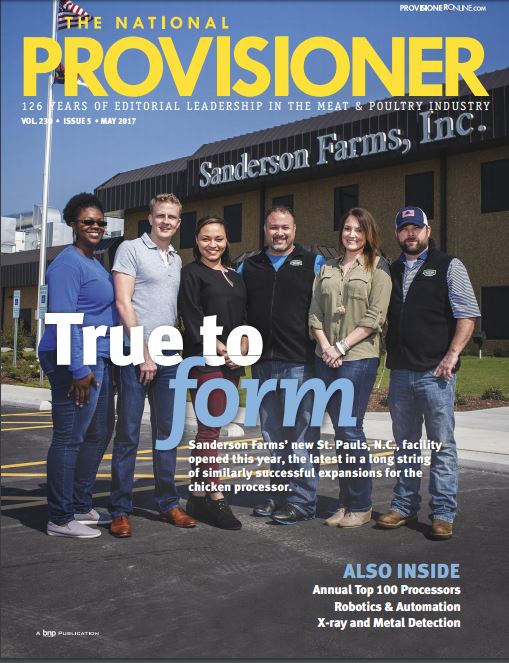 The May issue of The National Provisioner, the meat, poultry and seafood industry’s leading technology magazine, features Sanderson Farms’ new St. Pauls plant in Robeson County on its cover and in a Q&A with Bob “Pic” Billingsley, director of development and engineering for Sanderson Farms.

The coverage, focusing more on the plant’s cutting-edge technology than its plan to employ 1,100 people within three years, resulted from the Economic Development Partnership’s current campaign to pitch stories to trade media targeting four industrial sectors important to the state: food processing and manufacturing, aviation and aerospace, plastics and chemicals, and automotive.

The St. Pauls deboning facility will provide Mississippi-headquartered Sanderson Farms, the third-largest poultry producer in the U.S., greater access to the East Coast market. The plant’s ultimate workforce of 1,100, plus 100 contract growers, will add to the count of 1,600 people now working at Sanderson Farms’ other facilities in North Carolina.

“Since 2005, Laurel, Miss.-based chicken processor Sanderson Farms has been on an unmatched record of expansion in the meat industry, building and opening five processing plants (with a sixth brand new plant planned to open in 2019),” the magazine says.

The National Provisioner’s interview with Billingsley discusses Sanderson Farms’ manufacturing and waste-handling processes, as well as its company culture of growth. The new plant in North Carolina, which was built on a greenfield site, utilizes a mechanical wastewater treatment system for recycling wastewater. The recycled water will be used on a neighboring 1,500-acre plot of land owned by the company.

You can read the full National Provisioner interview here.

The Economic Development Partnership of North Carolina assisted local and state partners supporting the Sanderson Farm’s project. If your company is interested in locating in North Carolina or expanding here, connect with one of our recruiters by calling (919) 447-7744 or emailing clientservices@edpnc.com