NC 100: Industry Recruiters Hit the Road to Hear from Counties throughout the State

Business recruiters with the Economic Development Partnership of North Carolina continue to take to the road in 2017 — to meet one-on-one with local economic developers across the state, hear updates on available buildings and industrial properties, and strengthen partnerships that help bring new jobs to North Carolina.

In 2016, the EDPNC wrapped up the first full year of its new NC 100 initiative, which regularly sends our team of eight statewide business recruiters, their supervisor and key support and other staff into local communities for the two- to three-day regional gatherings. 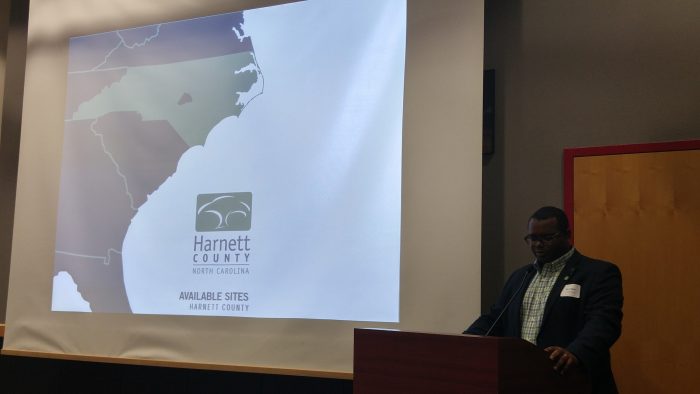 This year, the EDPNC is coordinating NC 100 gatherings in five different regions covering the entire state. Economic developers from all 100 counties are invited to participate in the nearest scheduled event.

Each participating county makes short presentations providing the latest details on its available properties or other community assets. These reports, as well as socializing over meals and tours of local sites and businesses, build relationships while bolstering the EDPNC’s firsthand knowledge of sites and communities throughout North Carolina. In 2016, local economic development officials from 90 counties attended their “neighborhood” NC 100 outreach event.

“Economic development is a team sport, and our partners live and work in 100 urban and rural counties across the state,” said David Spratley, EDPNC vice president for business recruitment. “So it made sense to set up ‘team meetings’ that enable local economic developers from all the state’s counties to meet regularly with our entire staff of recruiters.

“What is learned in these visits helps state and local economic developers better market and match locations to companies seeking the best place to relocate or expand,” Spratley added.

NC 100 events are also an opportunity to exchange best practices in economic development and discuss new ways to market properties and communities.

At  the NC 100 visit to Greensboro in February, Marty Kotis, CEO of Kotis Properties, presented a virtual reality system that could, for example, give companies interested in Greensboro properties means to see them without having to travel by car or plane. Conceivably, an economic developer could use such equipment, including its headset that displays a 360-degree video of a property, to market a location.

Thus far in 2017, EDPNC’s business recruitment team has traveled to communities in the Piedmont-Triad, North Central, Southeast and Southwest regions of the state. Visits to the Western and East/Northeast regions are scheduled in September and October.

In 2016, the EDPNC coordinated six NC 100 events drawing local economic developers from 90 counties over the year. Officials from 16 counties participated in the Elizabethtown gathering. The EDPNC heard from eight counties during its visit to Greensboro; nine counties in Charlotte; 14 counties during the Research Triangle-area event; 26 counties during a visit that included stops in Sylva, Asheville, Flat Rock and Boone; and 17 counties in a visit to Washington and Little Eden.