Why North Carolina Won the Fierce Competition for Infosys and its 2,000-Job Tech Hub

When Indian IT-consulting firm Infosys announced it was locating one of four planned U.S.-based innovation and technology hubs in North Carolina’s Triangle region, the main reason why was no big surprise.

After all, when a company intends to hire 2,000 new tech-hub employees within five years, it needs to be somewhere with an existing pool of talent and the ability to graduate and train more. 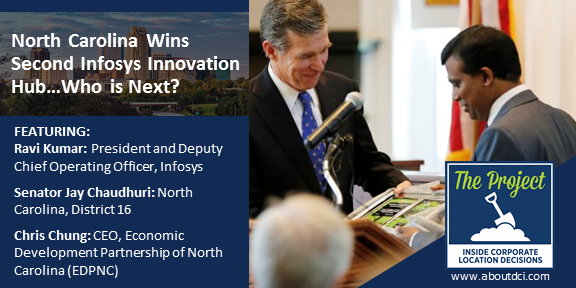 “North Carolina Research Triangle Park and Wake County, you know, they’re all synonymous to innovation,” said Ravi Kumar, president and deputy chief operating officer at Infosys. “The first time when I actually went there, I was overwhelmed by the academic ecosystem in and around the place. Very good universities, a great community college ecosystem.”

“In fact, a percentage of what we hire will also be from community colleges,” Kumar added. “We are very excited about how this could be an inclusive and a diverse strategy for talent acquisition.”

In a recent podcast interview published in The DCI Blog, Kumar explained why Infosys chose North Carolina for one its four U.S. hubs over aggressive competitors in Texas, Ohio, Connecticut, Maryland, Utah, Georgia, and Virginia.

The interview was produced for the series “The Project: Inside Corporate Location Decisions” presented by Development Counselors International (DCI). The discussion included Kumar; Christopher Chung, chief executive officer of the Economic Development Partnership of North Carolina; and state Sen. Jay Chaudhuri, who got Infosys on North Carolina’s radar because, well, he knew a guy.

“It really started with a relationship that I had with their [Infosys’] newly appointed vice president of global government affairs, who was a friend of mine…,” Chaudhuri told DCI. “Kind of his prior background was working on deepening ties between the United States and India. And from that conversation, he made me aware of the fact that the company was looking to establish innovation centers around the country.”

That introduction — and the senator’s continued work behind the scenes — gave North Carolina a leg up over the competition. But it wasn’t long before other states began cataloging and calling on their relationships with Infosys executives, including President Ravi Kumar.

Not be outdone, North Carolina Gov. Roy Cooper and state Commerce Secretary Anthony M. Copeland were always active players on the team vying to win the Infoysys tech hub, which will add 2,000 employees to its workforce of roughly 1,000 in Charlotte, Raleigh and elsewhere in the state. The jobs are expected to pay an average of $72,146.

“Again, if anything, this project, like so many, illustrates that to be successful recruiting this kind of great opportunity, it’s a team effort that involves a lot of different actors each contributing his or her own value to the process,” Chung said.

After three visits to the state, Infosys executives ultimately chose Wake County, not only because of its talent pool and educational resources, but also the presence of existing Infosys client clusters that offer the potential for scaling up business. In addition, the company found great support from local and state officials.

“Third and most important was the government. And our interactions with the government was outstanding,” Kumar said. “They were on the ball on all the information we needed. They very religiously followed up with everything we asked for. They were very prompt to step it up the local economic development partnership. And the North Carolina Chamber of Commerce substantiated our visit with meetings with local corporate captains, who gave us a feel about why North Carolina is such an important place.”

Listen to the full podcast here.