When Joan Maxwell and her husband Owen started Regulator Marine in 1988, their primary focus was making a single boat.

“We didn’t start out saying, ‘Oh, let’s build a company that employs 160 people.’ Our vision was much more narrow than that,” Joan recalls. “I think Owen had the design of the boat in his head, and I said, ‘okay let’s do this.’”

Almost 30 years later, what was just one boat is now something much bigger. 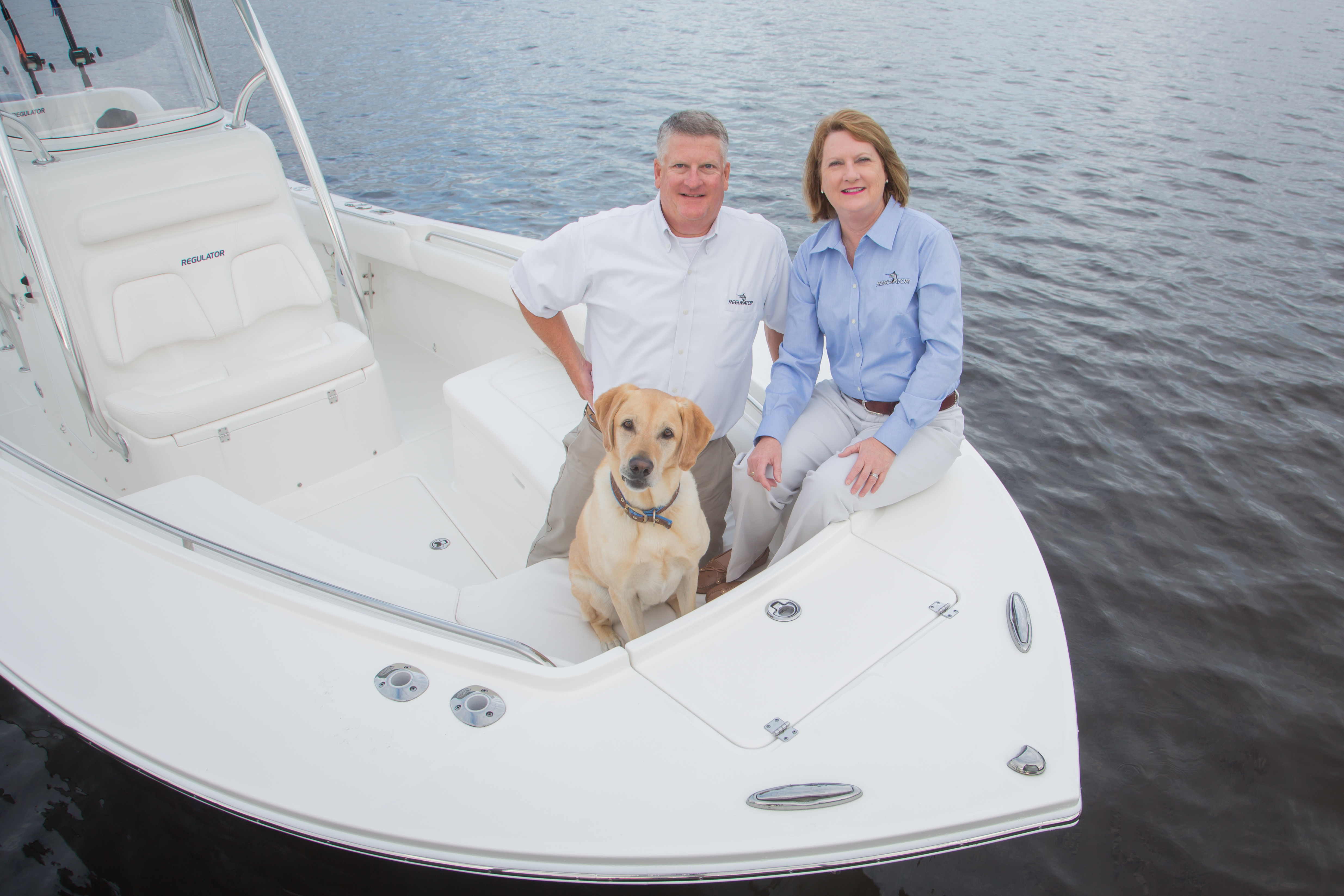 Today, Regulator employs 157 people across all functions of the organization. The couple has divided their duties: Joan oversees manufacturing and business operations, and Owen focuses on product development. Regulator boats are owned by clients around the world, and the company touts relationships with 19 dealers.

And Regulator is looking to a major lean manufacturing initiative to boost productivity and eliminate waste from their processes. They recently spent six weeks renovating a training facility into a “war room,” and are excited to kick off their lean journey in May.

But getting here wasn’t easy—particularly for a business that sells a luxury product and depends on consumer confidence in the market to drive sales.

“Certainly the recession challenged us in ways that we had never been challenged before,” Joan says. “We went from 160 people in April 2008, to around 11 by the close of 2008. We were able to bring back 39 people in late January 2009. That was a very difficult time for us here. But we’re very, very grateful. God is good. We’re here, we’re growing and we’re grateful to be back.”

Despite all the challenges it presented, the recession also brought about some changes that had a lasting, positive impact on the company.

“During the recession, we looked at building other products, not just boats. But to be considered in that marketplace, the process had to be ISO-certified,” she says, referring to a manufacturing certification issued by the International Organization for Standardization.

”[Being ISO-Certified] has helped us to really standardize what we do around here. Today, we have  standard operating procedures in place for almost every part of the boat-building process, which allows us to build a consistent, high-quality product.”

Additionally, operating out of a coastal community with a population just under 5,000 people meant that finding talent was another challenge.

“Edenton is wonderful, we absolutely love it here. But not everyone likes small town life,” Joan says. “Finding professionals who are willing to relocate here can be difficult.” Difficult—but not impossible, thanks to locally-connected talent from North Carolina State University and others.

Regulator also utilized the WorkKeys jobs skills assessment program to establish hiring criteria for its manufacturing workforce. In addition, they partnered with the College of the Abermarle, a local community college that developed a boat-building program to support the company.

“That was helpful to get people through some basics,” Joan says. “They could go through the program, and then we would at least guarantee them an interview.”

Even with these challenges, Joan found that building a business in the eastern part of the state has its perks.

“There are lots more grants available [for businesses] in the rural part of the state. We’ve taken advantage of some of those,” Joan says.

In the early 2000s, Regulator received support from the Northeast Partnership (since reorganized into the NC East Alliance) to upgrade its computer system. Right before the recession, Regulator received a grant to extend the water lines ahead of a planned expansion. Ultimately, they had to return that money due to the downturn and their resulting difficulties meeting the grant’s job-creation requirements. But Joan says the experience was still positive.

“The fact that there seems to be a great partnership between local and state government here in the rural areas—understanding how precious one job is—makes it a lot better to do business in this area.”

When asked about what’s driving their success today, Joan notes a few factors—process, product and people; a recent letter from a Regulator customer attests to all three.

“The roots of the quality from which the Regulator boat is known became glaringly apparent to me as I toured the factory floor with Al,” the customer wrote. “Every associate on the factory floor greeted me with a sincere smile and was chomping at the bit to tell me about the part they’ve played in the process. You could see the pride that every associate takes in each boat that they are a part of building. I was joking with one associate working on my boat. I asked him to take extra care, as it was my boat. His response was priceless. ‘Sir, I will make it perfect like I do on everyone’s boat.’”

But great employees are one thing—for Regulator, it’s the sense of community in Edenton that’s really a differentiating factor.

Joan also recognizes that operating a company in a small town goes both ways. “One of the greatest things is to see what a business can do for the community. At Regulator, if anyone’s kids wants to go to camp—they want to go to 4H Camp, or Camp Cale or Kids and Cops camp—we pay for that. And we do that because it’s a privilege to be in this community, and we know that the lives that we impact today may be the employees that work here in the future.”

For Joan, the opportunity to live and work in Eastern North Carolina is not just about being home; being in Eastern NC is a privilege. “Here in Edenton you can walk downtown, sit on a park bench, and let the water lap on the shore and feel the breeze on your face. It takes away all the things that you carried down to that waterfront with you. You can drive down the highway and look out over acres and acres of farmland and just feel the openness of the land. And, for us, the ruralness is freedom. It feels like you can do anything.”