The Economic Development Partnership of North Carolina’s work with Randolph County illustrates how a strong local and state partnership supports the growth of smaller manufacturers located in rural communities.

In 2018, six manufacturers — assisted by Tracy Dellinger of the EDPNC and Kevin Franklin of the Randolph County Economic Development Corporation — announced expansions expected to create up to 113 new jobs and over $5 million in new capital investment in Randolph County.

“In my six-year tenure here, we’ve never had this volume of projects close in a single year.”

“In my six-year tenure here, we’ve never had this volume of projects close in a single year,” said Franklin, vice president of the county economic development organization and a familiar face to local companies. He makes 100 to 150 visits to local companies each year, building relationships that support their growth down the road.

Most are manufacturers. And when Franklin stops by, he asks about their operations and where they need support. If a company is poised for an expansion and needs state help getting there, Franklin reaches out to Dellinger, a regional existing industry manager with the EDPNC. “I get Tracy involved immediately and make sure she and I schedule a follow-up visit together to the business.” 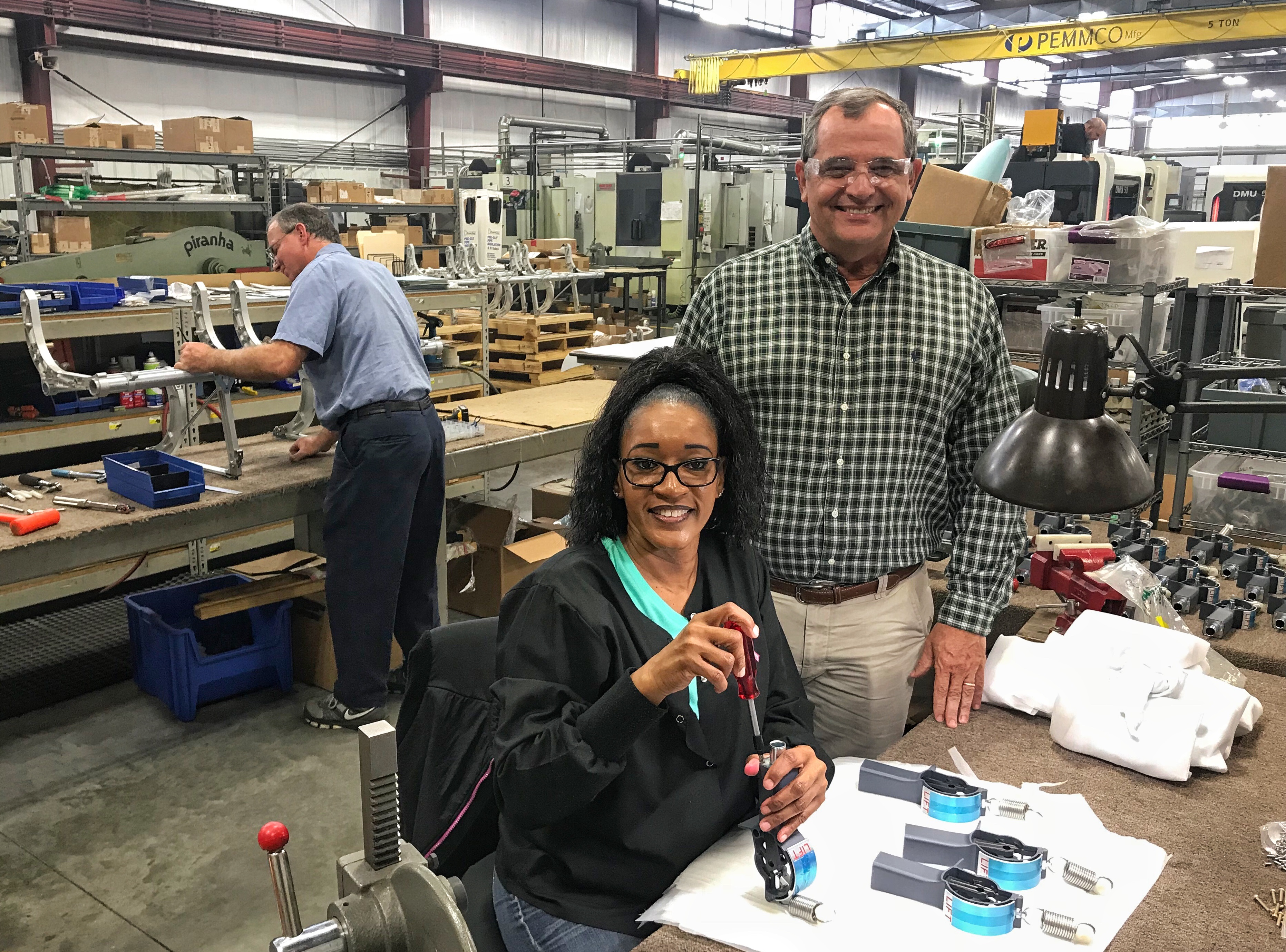 PEMMCO Manufacturing in Asheboro launched one of six plant expansions supported by the EDPNC in Randolph County in 2018. Here, company President Rick Powell stands behind employee Carol Parker as she assembles video arms for aerospace industry use.

Dellinger visits roughly 150 companies a year in serving her 11-county region. She is a liaison to state business-support resources that include various grant opportunities, workforce development programs and more.

In 2018, Dellinger helped city and county government officials shape successful applications for state building-reuse grants supporting all six expansions announced in Randolph County. Such grants can upfit a vacant building or help fund an addition to a company’s existing plant.

“Kevin loops me in immediately, which helps present the best possible case for grant support,” Dellinger said. As soon as she gets Franklin’s call about a possible expansion, Dellinger sends the manufacturer the state’s required “project summary form,” and she and Franklin arrange their joint visit.

“We like to sit down with the company to best understand what’s going on,” Franklin said. “To walk the plans on the grounds of the facility — to understand where the congestion areas are, where the expansion plays in and what it’s going to accomplish.”

“Tracy provides that direct interface between the company and state,” he said. “She answers the more technical questions and helps the company understand specifically how the programs work. She works with businesses directly to make sure the information they provide on the project summary form is relevant.”

“We don’t just talk about the expansion,” Dellinger said of her visits and calls with the company. “We also talk about other opportunities down the road. I’ll ask if they export and tell them about EDPNC services to support their overseas sales. Then I can connect them to our trade division. Or we may talk about workforce training support.”

Franklin makes Dellinger’s job much easier. “Kevin has built such good relationships with his existing industry. He is out meeting and talking with companies all the time,” Dellinger said. “And we have confidence in each other to pull the pieces together.”

Another good judge of their partnership is PEMMCO Manufacturing in Asheboro, which the pair assisted in launching a 15,000-square-foot plant expansion in 2018. That work included helping the city successfully apply for a $250,000 building reuse grant to support the project, which will add 20 jobs to the company’s current local workforce of 86. PEMMCO also plans to invest $650,000 in the expansion and $500,000 for new equipment.

“The thing that impressed me is how well those two worked together,” said Rick Powell, president of the precision machining company that serves the aerospace, automotive, lawn and garden, firearms and heavy truck industries. “They told me, ‘Here’s what we can do. We can provide you all the information and pull a proposal together. We’ve just got a couple of very simple questions.’ They made it simple.”

As part of the grant-pursuit process, Franklin and Dellinger arranged for necessary meetings between PEMMCO and local and state officials. Aside from PEMMCO, company expansions the pair supported in 2018 included: Liberty Trailers, a $2.9 million project that will add 24 jobs to the company’s 26-person workforce in Liberty (with plans for another 24 jobs over five years); Engineered Steel Products in Sophia, a 10-job, $750,000 expansion at its 40-employee plant; Ambella Home Collection in Archdale, a 12-job, $281,000 expansion of its 45-employee plant; Trinity Furniture, an 11- job, $254,000 expansion of its 84-employee Trinity plant; and EG Industries, a 12-job, $240,000 expansion at its 84-employee Seagrove plant.