BY RAIL, ROAD, SEA OR AIR, YOU CAN GO FASTER IN NORTH CAROLINA.

“North Carolina was chosen for the location, for the utility and the transportation advantages, and the state contains an exceptional workforce. In addition, we can service our customer base quicker and provide more cost-effective transportation.”

AN UNSURPASSED LOCATION ON THE EAST COAST

North Carolina’s prime location on the eastern seaboard means that almost half of the U.S. population is within a day’s drive. Four international airports, two deep water seaports and a strong rail system further enhance our state’s supply chain advantages. If access is what you need, you can get anywhere from here. 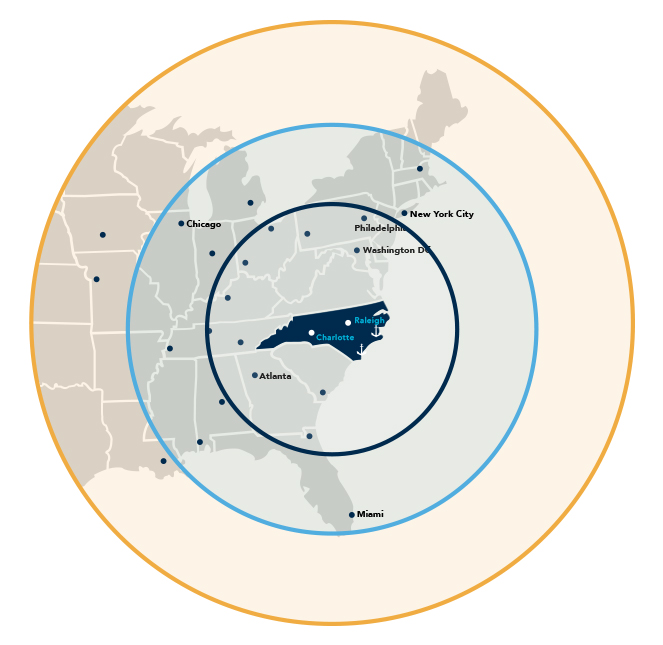 Air
The world's 5th busiest airport is located in Charlotte

North Carolina is one plane change away from virtually any major city in the world.

In addition, NC is home to 62 general aviation airports.

The North Carolina coast is home to two deep water seaports ports offering fast turn times with capacity to support more than 320,000 TEU and more than 4 million plus tons of general cargo annually.

In addition, an inland port in Charlotte sits at the heart of the Southeast’s manufacturing and distribution sites.

North Carolina is home to two Class-1 rail carriers. These rail connections extend all the way to the coast, enabling the state ports in Morehead City and Wilmington to offer import and export services to a large market.

Highlights of our rail system include: