In 2013, Stay Online Corp. attended its first international trade show outside the U.S., just as it was beginning to explore overseas markets for its products.

What a difference three years makes.

The end assembly manufacturer of power cords, plug adapters and other power connectivity products has attended many more trade events, increased its exports from 5 percent to 20 percent of company sales, opened a warehouse and distribution center in Czech capital, Prague, and expanded the demand for its products well beyond its initial foreign markets in Canada and Latin America.

“Now we ship to more than 100 countries a year,” said Bellinda Higgins, Stay Online co-owner with her husband, Jim. And exporting has contributed to the company’s ability to grow from 30 to 85 employees since 2013. 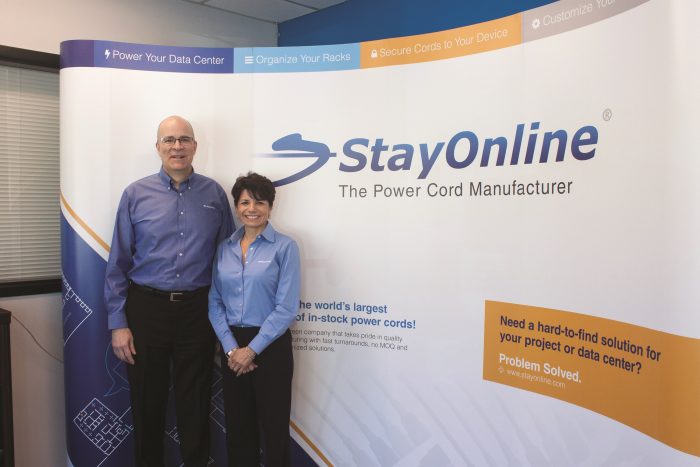 The connection between exports and job creation is the core reason federal agencies annually name Exporters of the Year and President’s “E” for Exports Award winners in each state. Stay Online won both recognitions in 2016.

Kuldip Wasson, EDPNC director of global operations, and partners such as the Small Business and Technology Development Center (SBTDC) in Raleigh have been with the Higginses for their entire exporting journey — creating a network that has connected them to export education classes, funding to attend trade shows, foreign market analysis, help with developing a strategic export plan and assistance in finding the Prague location for their new warehouse and distribution center, which opened in 2015.

“The distribution center in Prague has changed the landscape in the customers we have been able to attract,” Bellinda Higgins said. “We can stock our inventories in Europe and have it shipped from Prague.”

The Prague location supports a Stay Online edge — its ability to draw on a large inventory or quickly customize products before shipping. The company also has no required minimum-order quantity (MOQ).

“Through our immense inventory and no MOQ, we can offer same-day shipping,” Higgins said. “If something isn’t in stock, we can choose from our root cords, cut off an end and mold in-house the necessary plug, according to the customer’s needs. Our in-house molding capabilities have increased sales opportunities for us around the globe.”

The EDPNC’s Wasson coordinated Stay Online’s participation in its first international trade show, as part of the North Carolina pavilion at the 2013 CeBIT in Hannover, Germany, the largest information technology trade show for industry professionals. The show was a good fit, since Stay Online’s products cater to the needs of businesses such as original equipment manufacturers, technical businesses, data centers and hospitals.

The EDPNC has also assisted the Higginses with federal grant funds to offset travel costs of some of the many international trade shows it has attended since CeBIT 2013. Wasson also introduced them to an SBTDC international trade counselor who helped Stay Online develop a strategic export plan.

The EDPNC’s help hasn’t stopped at export assistance. In 2016, Wasson and Harry Swendsen of the EDPNC’s existing industry support team visited Stay Online’s Creedmoor plant and learned a portion of it had HVAC and roofing issues that were keeping the company from expanding production and hiring new personnel. Swendsen encouraged the Higginses to apply to a state grant program that could help renovate the building.

In December 2016, the state approved a $499,190 grant to help renovate the Creedmoor building, contingent upon the company committing to a 50-job expansion.