There are some people for which starting a successful business is a happy accident—something that comes out of a spark of inspiration. There are those for which entrepreneurship is more like auditioning for their big break: if at first you don’t succeed, try again.

For Gilbert Patrick, entrepreneurship is in his blood. 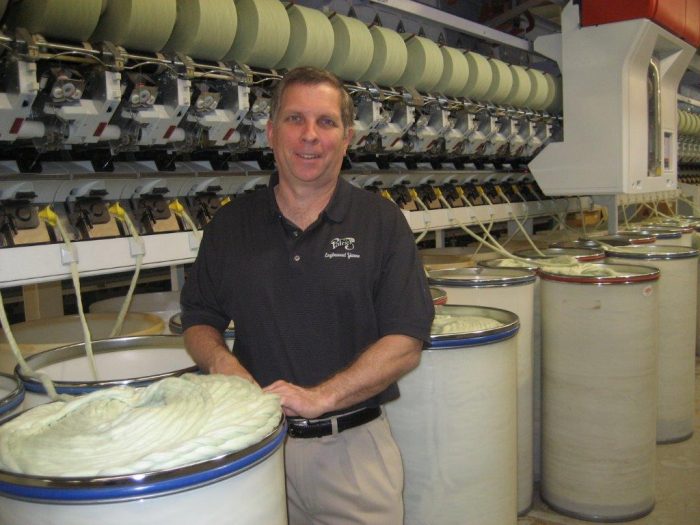 “My father, Henry Lawrence Patrick, was an entrepreneur and I grew up in his shadow,” Gilbert says. “My maternal grandfather was also a successful entrepreneur, and my paternal grandfather was a very distinguished Presbyterian pastor who was awarded an honorary doctorate from Davidson College for his commitment to the ministry. So, I guess the drive to chart my own course is part of my DNA.”

Gilbert’s family business, Patrick Yarns, was founded in the early 1900s by Gilbert’s grandfather. Back then it was called Kings Mountain Cotton Oil Company, which, according to a 2009 article in Time magazine, “consisted of a cotton gin, a yarn mill, and an ice plant—a business for every season.”

It wasn’t until Gilbert’s father took over that the business took on a new identity.

“My father served in the Marine Corps during WWII and the Korean conflict. After his last tour of duty he returned to Kings Mountain, and bought the family business from my uncle,” Gilbert says.

Around that time, the ice and coal business was deteriorating, thanks to the arrival of refrigeration and heating oil. However, that was not the case for the textile side of the business.

Kings Mountain is about 15 minutes down the road from Gastonia, also known as “The Spindle City.” Gastonia once touted the highest ratio of textile spindles per capita. Charlotte, also nearby, boasted the largest number of textile spindles within its 100-mile metropolis—more than any other city in the world.

“Our area’s economy was driven by textiles, mining and agriculture,” Gilbert recalls. ”Opportunities in textile markets were abundant at that time, with a wealth of available skilled talent to help in achieving goals.”

And by seizing that opportunity, Patrick Yarns came to be.

The company began by producing synthetic yarn used for wet mops. Through the 1990s, this grew to include many different constructions of mop yarns, glove yarns, and filtration yarns.

Gilbert took over leading the company in 1993.  Today, Patrick Yarns employs 220 people, many of whom have worked at the company for over 25 years. Their yarns are incorporated into an array of products including fiber optic cables, heat and cut protective apparel, geotextiles, home furnishings and earth-friendly apparel.

Weaving through challenges in a changing industry

Of course, starting and growing Patrick Yarns was not without challenges—but this was particularly true for a textile manufacturer operating in a rapidly-changing industry.

Specifically, Gilbert points to heightened competition with the Chinese textile industry and a multitude of trade agreements that were passed in the early 2000s. “The rules of business changed with each agreement. It was hard to forecast business because you didn’t know how each agreement would affect the customer base.”

The company responded to these challenges by introducing new products, perfecting smaller lot sizes with quick turnarounds, and making products to better compete in domestic and foreign markets.

For the Patrick family, their roots run deep in Kings Mountain. “I don’t know if we chose Kings Mountain as a business location or it chose us,” Gilbert says. “Our family is very proud that we can trace our lineage to several patriots that fought in the Battle of Kings Mountain in 1780. My mother was a seventh generation Kings Mountain resident. My paternal grandfather built and was pastor of the First Presbyterian Church in Kings Mountain for 23 years, which is how my parents met.”

Family ties aside, Gilbert found there are many benefits to doing business here, among them: a pro-business environment, good weather and low cost utilities. “The laws passed over the last four years…have helped to make North Carolina more business friendly and competitive not only with other states, but with export business as well,” Gilbert says. “It doesn’t hurt that the weather in North Carolina is superb, with very few days of inclement weather to deter transfer of goods. The Duke power grid is very economical, and consistent with few outages.”

But it’s the people who stand out the most. “The employee base in our area is very stable; [they have] a great respect for family values, and an excellent work ethic. They take pride in their work,” Gilbert says. “Our employees are challenged daily with new and unique yarn constructions for challenging end uses. It is this ‘can do’ attitude, along with our modern machinery and facilities that makes Patrick Yarns unique within the U.S. textile industry.”

Patrick Yarns can trace their roots back to the early 1900s, and yet Gilbert and his team have only scratched the surface of what they can do here in North Carolina. Patrick Yarns’ development team recently introduced several new products that are showing potential. Gilbert also says that an increase in demand across all their other products is a good indication of continued growth.

Looking to the next 10 years, Gilbert sees a growing demand for engineered specialty yarns for demanding performance-end uses. (That’s industry-speak for yarns used for smart apparel, sports and military apparel.) All that said, Gilbert tries to stay true to his father’s original vision.

“My father is the one person that I look up to and hear whispering in my ear when making decisions and dealing with people.”