Case Study: A Look at the Possible Economic Impact of the Atlantic Coast Pipeline

What does a massive North Carolina industrial complex that can churn out $1 billion worth of steel a year have in common with a processor of sweet potato-based food filler located 90 miles away?

In July, the Federal Energy Regulatory Commission (FERC) issued its final environmental impact assessment of the pipeline, which would carry natural gas across West Virginia, Virginia and North Carolina. The assessment concludes that while the pipeline would have some adverse environmental effects, most could be reduced to insignificant levels. 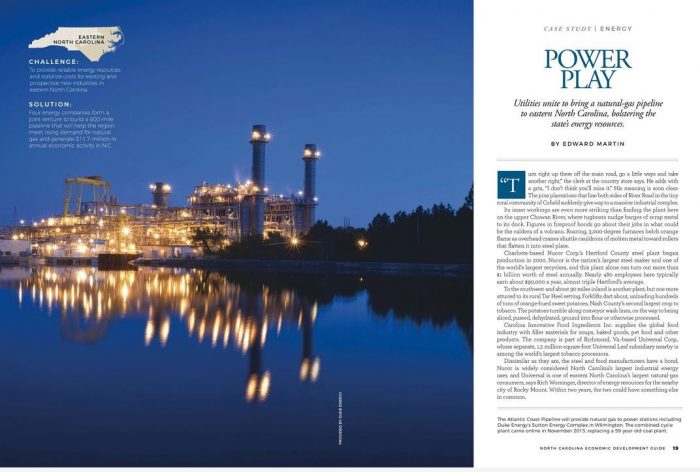 Writer Edward Martin’s article in the 2017 North Carolina Economic Development Guide, published by Business North Carolina, takes a closer look at the possible economic impact of the pipeline project. The article opens with the illustration of the Nucor and Carolina Innovative Food Ingredients plants.

“The Atlantic Coast Pipeline is a proposed $5 billion conduit for natural gas that will roughly parallel Interstate 95 for nearly 200 miles in eastern North Carolina,” the article says. “When completed in late 2018, it could reduce or stabilize energy costs for these manufacturers and others by more than $130 million a year, according to economic studies commissioned by its builders. It could also reassure prospective new industries of the volume and reliability they need and trigger development on a scale unseen in eastern North Carolina.”

Many business and political leaders support the pipeline, while many environmentalists and landowners affected by the project oppose it. Pipeline developers say the recent FERC assessment puts the project on track for final approval later this year. But opponents insist remaining legal challenges and permitting requirements mean it’s not a done deal.

In the article published before FERC released its final assessment, Gary Brown, director of the Northampton County Economic Development Commission, says that without the new pipeline, it’s uncertain if the region could land another Nucor.  The steel plant employs nearly 480 people who earn $90,000 a year on average, almost three times the Hertford County average, the article says.

Such sentiments are echoed by other Eastern North Carolina industry recruiters interviewed for the article. They include John Chaffee, president of the NCEast Alliance, a private nonprofit economic development organization representing more than two-dozen North Carolina counties.

“Over my almost 40-year career, I’ve repeatedly had companies tell me, ‘Sorry, we can’t consider that site because the gas company is telling us it can’t guarantee a good supply of natural gas,’ ” Chaffee says. The pipeline “we think, will be largely a remedy for that circumstance.”

David Trusty, a spokesman for Piedmont Natural Gas Co., one of the companies behind the pipeline project, likens its potential economic impact to “bringing a major interstate to a region that didn’t have one previously.”

Access the full article here. You can also download the 2017 North Carolina Economic Development Guide to read this and other timely case studies, as well as listings of economic development resources and assets in every region of the state.