“We’re excited to stand up our new global technology center here in North Carolina to continue to drive our company’s growth,” said Marvin R. Ellison, president and chief executive officer of the company based in Mooresville, North Carolina.

“Locating our new facility in the heart of Charlotte, the state’s largest metropolitan area, will enable Lowe’s to attract top technology talent and foster collaboration with our teams in our nearby Mooresville headquarters,” Ellison said. “This team will create technology solutions that will accelerate our commitment to becoming a best-in-class, omni-channel retailer and strengthen our associate and customer experiences.” 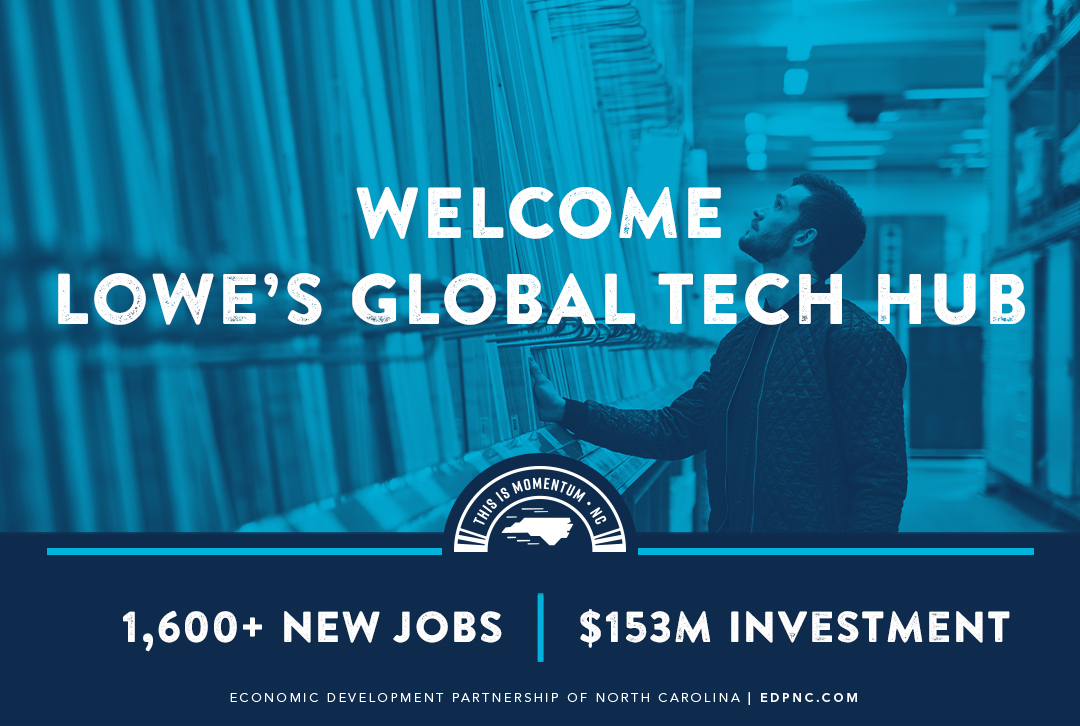 Lowe’s serves more than 18 million customers a week in the United States and Canada, across more than 2,200 home-improvement and hardware stores. Associates at the new center will help accelerate the company’s technology transformation, serving as an epicenter for the team that will help modernize technology systems for the company.

The company announced in December 2018 it would add up to 2,000 technology associates to transform the company’s technology. Most of the new positions will be based at the new center in Charlotte, while others will join at existing Lowe’s locations where it has a strong technology team presence, including its Mooresville headquarters.

“Lowe’s is expanding in a way that will take technology to new heights, and this company knows its home state can provide the highly trained workforce it needs,” Gov. Roy Cooper said. “We are committed to ensuring workers have the right skills to encourage companies to grow their footprint in our state with confidence.”

Lowe’s plans to locate its new global technology center in Charlotte’s South End, Ellison said. Set to open in late 2021, a 357,000-square-foot facility will be located in a new 23-story tower, branded with Lowe’s, in the bustling neighborhood immediately south of uptown Charlotte. The developer, a joint venture between Childress Klein and RAM Realty Advisors, plans to break ground on the building, called Design Center Tower, in August 2019.

Next to the Lynx Blue Line light rail, the Rail Trail, restaurants and available parking and housing, the new building will provide attractive amenities for the area’s top tech professionals. The Charlotte Plaza in uptown Charlotte will serve as the interim home for the Lowe’s tech center.

“For nearly 75 years, Lowe’s roots in North Carolina have run deep, growing from one small hardware store into a Fortune 50 home improvement retailer,” said North Carolina Commerce Secretary Anthony M. Copeland. “Their story exemplifies North Carolina’s strengths as a business location and demonstrates how our state provides everything a company might need, no matter the stage of growth or level of skill sought.”

The state Department of Commerce and the Economic Development Partnership of North Carolina (EDPNC) led the state’s support for the company’s expansion. 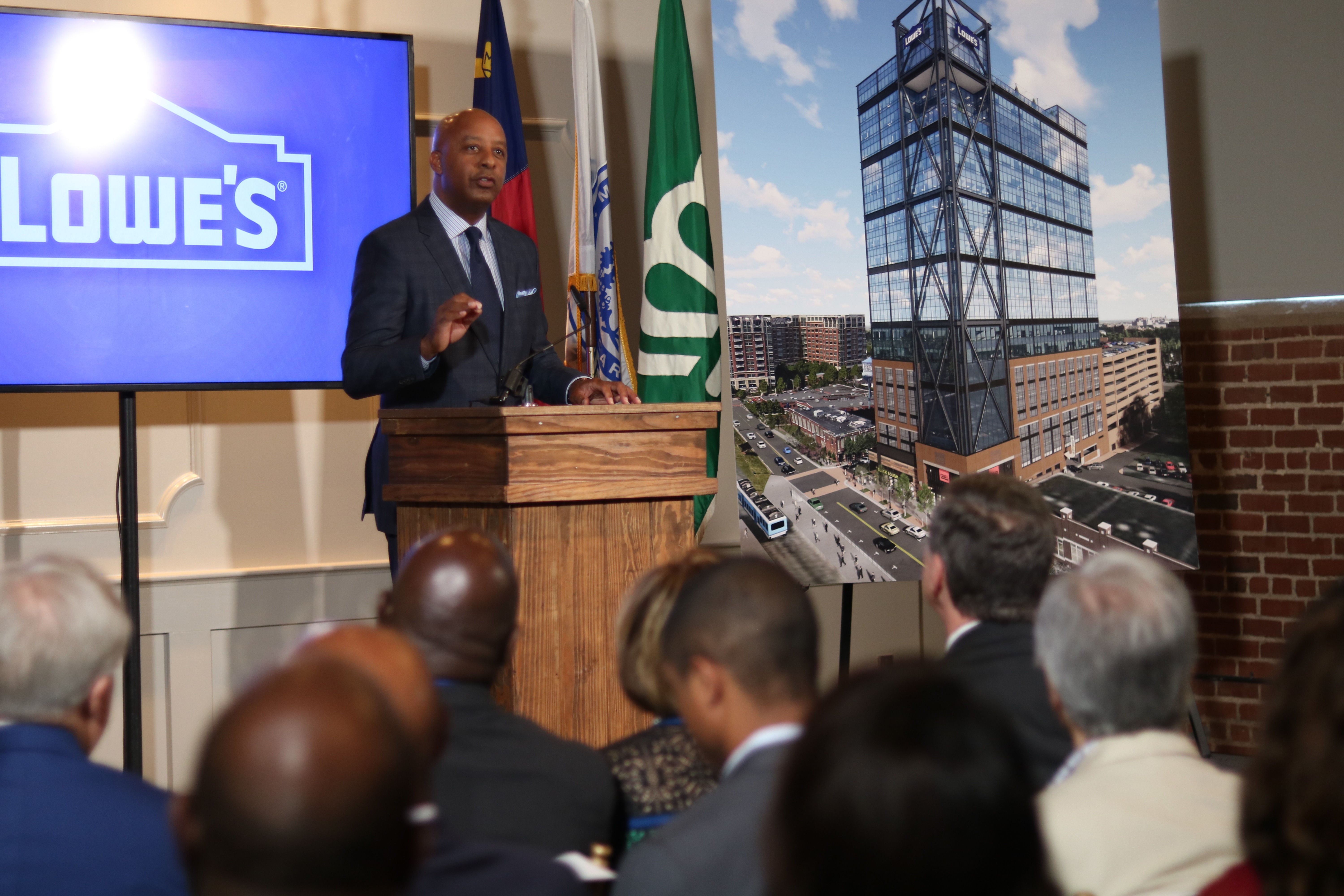 In addition to its $153 million capital investment in the project, Lowe’s will add a variety of technology positions, including software and infrastructure engineers, data scientists, analysts, architects, user experience (UX) and user interface (UI) professionals, and technologists with artificial intelligence and machine-learning engineering experience.

Lowe’s expects to fill the first 400 positions in the next year and plans to begin hiring for these positions immediately. Candidates can visit jobs.lowes.com/technology to learn about available positions and apply online. While salaries will vary by role, the average wage for the new positions will be more than $117,000.

Lowe’s technology center expansion in Mecklenburg County will be facilitated, in part, by a Job Development Investment Grant (JDIG) and a grant from the One North Carolina Fund.

The JDIG was approved by the state’s Economic Investment Committee earlier today. Over the course of the 12-year term of this grant, the project will grow the state’s economy by an estimated $6.3 billion. Using a formula that takes into account the new tax revenues generated by the 1,612 new jobs, the JDIG agreement authorizes the potential reimbursement to the company of up to $54,090,750, paid over 12 years. State payments only occur after the company has met its incremental job creation and investment targets. JDIG projects result in positive net tax revenue to the state treasury, even after taking into consideration the grant’s reimbursement payments to a given company.

Because Lowe’s chose to expand in Mecklenburg County, classified by the state’s economic tier system as Tier 3, the company’s JDIG agreement also calls for moving as much as $18 million into the state’s Industrial Development Fund – Utility Account. The Utility Account helps rural communities finance necessary infrastructure upgrades to attract future business. Even when new jobs are created in a Tier 3 county such as Mecklenburg, the new tax revenue generated through JDIG grants helps more economically challenged communities elsewhere in the state.

A performance-based grant of $2 million from the One North Carolina Fund will also support the project. The One NC Fund provides financial assistance to local governments to help attract economic investment and to create jobs. Companies receiving One NC grants must meet job-creation and capital investment targets to qualify for payment. All One NC grants require a matching grant from local governments.