The newly published report “2018: Evidence and Opportunity: Impact of Life Sciences in North Carolina” is a fascinating story of transformation.

It also marks the 10th anniversary of the North Carolina Biotechnology Center’s contract with TEConomy Partners to track and evaluate the state’s life science landscape.

Bottom line: The nation’s 10-year escape from the Great Recession has produced an even greater run for North Carolina’s life science sector: 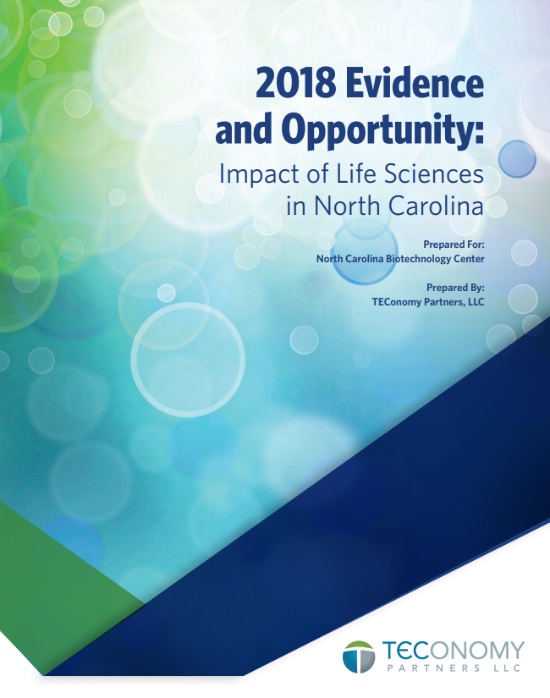 Every two years for the past decade, NCBiotech has published this examination by the highly respected consulting firm. It’s a months-long data dive by outside professionals to understand how well the Center is accomplishing its mission to transform North Carolina’s economy through an ever-growing base of global life science leadership.

The executive summary opening this sixth edition notes that “North Carolina has established one of the nation’s leading life science industry clusters, characterized by steady, long-term growth and establishment of a diverse blend of industry, technology, and market strengths and niches.”

The latest TEConomy audit shows the state’s life science sector generated nearly $2.2 billion in state and local government revenues in 2018, up from $1.4 billion in 2008.

North Carolina’s 50 percent life science employment increase was fourth-highest nationally in the decade and a half through 2016. That compares to a 12 percent growth in the state’s overall private sector since 2001, “and has far exceeded the pace of national (life science) industry growth of nearly 19 percent.”

The research, testing, and medical labs sector, along with the state’s bioscience-related distribution sector, have enjoyed especially high employment growth in the state. They’ve both outpaced national job growth since 2014.

Medical devices and equipment is also an important subsector mentioned by TEConomy, though its share of the life science economy’s significance is more recent. It generates $3.2 billion in economic activity, supports 11,639 jobs earning $800 million and generating $92 million in state and local government revenues.

TEConomy says North Carolina’s success in building a top-tier $83.3 billion life science economy has been hard-earned, “in large part due to the early foresight and consistent dedication of the North Carolina Biotechnology Center, with funding from the state of North Carolina, through a nearly 35-year emphasis on industry and ecosystem development programs and initiatives. Strategic investments combined with a vital role as a connector and facilitator have enhanced the innovation ecosystem for life science development.”

The report notes that NCBiotech’s statewide cluster development activities, emanating from its Research Triangle Park headquarters and regional offices in Asheville, Charlotte, Greenville, Wilmington and Winston-Salem, have proven effective. “The diversity of North Carolina’s life science industry is not only characterized by its industry subsectors but further by its geographic reach across every region of the state.”

The report includes an analysis of the impact from NCBiotech loans to 204 North Carolina life science companies since 1989. Of those 204, 107 are currently active in some form, employing 2,544 people and generating estimated revenues of $2.5 billion.

That, in turn, creates $3.8 billion in economic activity statewide, creates or supports 10,390 jobs earning $732 million in labor income, and produces $98.4 million in state and local taxes.

“North Carolina receives a strong return on its investment in NCBiotech,” notes the report, deriving far more benefit than it allocates for the Center’s annual budget. TEConomy estimated the state government gets $60.3 million of the estimated $98.4 million in annual tax generation from NCBiotech portfolio companies, “an amount more than four times greater than the state’s appropriation to NCBiotech of $14.0 million for fiscal year 2018–2019.”

“Companies that have received business loans from the Center now account for almost 5 percent of the economic activity associated with the entire life science industry.”

North Carolina’s enviable success in becoming one of the world’s best life science hot spots “can be directly tied, at least in part, to the deliberate, sustained programmatic initiatives and partnerships of NCBiotech,” says the report.

The impact of life science manufacturing

The support and recruitment of life science companies statewide includes an important array of manufacturing facilities. The report cites the “increasing role of manufacturing and other high value-added components in the sector” as a significant contributor to the sector’s employment growth since 2008. Life science employment during that time grew by more than 19 percent statewide. Revenue estimates for the industry grew by 93 percent during that time, though part of that number results from a statistical fluke because of a change in the modeling process used by TEConomy.

North Carolina stands as a global leader in the highly specialized world of biomanufacturing, thanks in large part to the 2003 launch of the NCBioImpact initiative in workforce development. At that time there were 17 companies in biomanufacturing, employing 4,754 people.

Those numbers jumped 93 percent by 2018, TEConomy says, with at least 25 biomanufacturers employing 9,163 people directly. Those workers are creating a wide range of high-value products including biopharmaceuticals, animal health products, food ingredients and industrial products such as enzymes.

The report notes that North Carolina has between four and five times the concentration of high-value biological product manufacturing as the national average. The 25 companies evaluated for the report had estimated revenues of $9.9 billion and generated nearly $14.2 billion in economic activity for the state.

Interested in locating or growing your business in North Carolina? Email EDPNC’s business recruitment team or call us at 919-447-7744.