Employment in North Carolina’s information technology sector surged by nearly 30 percent from 2010 to 2015, the fastest growth in IT jobs in the U.S. over the period, according to the 2017 North Carolina State of Technology Industry Report. And two recent blockbuster expansions in the state suggest that pace won’t be slowing anytime soon.

In July, Infosys, an India-based consulting and IT services company, revealed its selection of North Carolina’s Research Triangle area for a new tech hub that will create 2,000 jobs. Infosys already employs over 1,000 workers in North Carolina. Two months earlier, Swiss banking giant Credit Suisse announced a planned 1,200-job expansion of its Durham tech hub. Roughly 40 percent of those jobs will provide IT support for the company’s existing and emerging divisions. 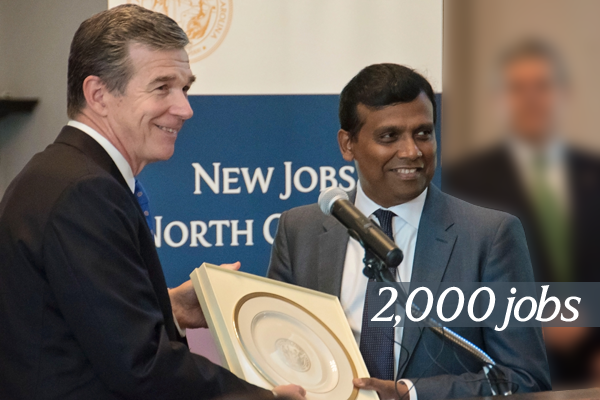 The number of IT workers in the state increased 28.4 percent from 2010-2015, according to the report issued earlier this year by the North Carolina Technology Association. The group’s membership includes more than 700 tech-intensive companies operating in the state.

Across all categories, the state’s tech industry jobs grew 20.6 percent from 2010-2015, the nation’s third-highest growth rate and well above the 10.9 percent national average, the report says. More than 18,200 technology establishments operated in North Carolina in 2015.

Here are a few additional highlights from the report:

Download the full report or find out more about the North Carolina Technology Association online.

If you are interested in locating or growing your business in North Carolina, connect to an EDPNC business recruiter by calling 919-447-7744 or emailing clientservices@edpnc.com.