North Carolina ranks as the nation’s top state business climate in 2020 in a two-way tie with Georgia, according to Site Selection magazine.

“North Carolina is a consistently strong performer in this ranking and has demonstrated once again that it has the business-climate attributes it takes to reach first place,” said Site Selection Editor in Chief Mark Arend.

Ohio ranks third overall in the latest Site Selection ranking, followed by Texas and South Carolina in fourth place. Virginia, Alabama, Arizona, Kentucky, and Tennessee round out the 10 top states. 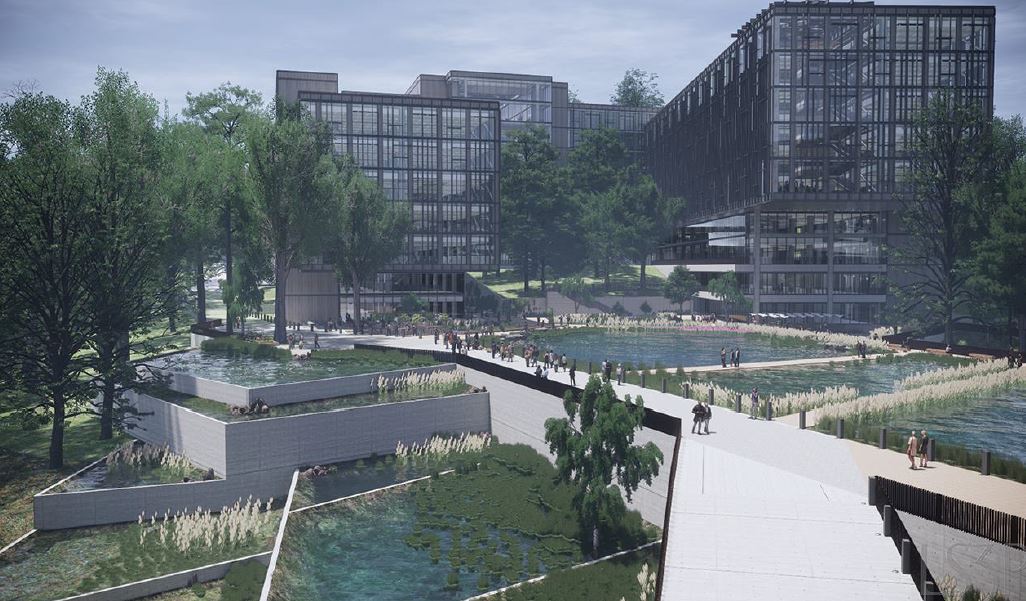 A rendering of health insurance giant Centene’s planned $1 billion regional hub in Charlotte. In July 2020, Centene announced the project committed to creating 3,237 jobs — a number its CEO says could grow to 6,000 jobs.

Christopher Chung is chief executive officer of the Economic Development Partnership of North Carolina, which markets the state for business growth. “We’re thrilled North Carolina has received this recognition, and to be part of the team of state and local partners that helped make 2019 a decade-topping year for North Carolina in terms of corporate recruitment and expansion announcements that promise 21,000 new jobs,” Chung said.

“In 2020, this same team of partners remains committed to working together to help existing businesses in the state, as well as those that want to locate here, successfully navigate the challenges of a global pandemic.”

Fifty percent of the Site Selection ranking relies on a survey of corporate real estate executives asked to rank states based on their recent experience in locating facilities in them. This year, the executive survey put Texas in first place, followed by North Carolina and South Carolina tied for second place. Georgia and Tennessee round out the top five.

“Rising to No. 1 on Site Selection’s list of states with the best business climates  is fantastic news,” said Frank E. Emory Jr., chairman of the EDPNC board of directors. “Our confidence in future successes is fueled by some exemplary announcements in 2020: Health insurance giant Centene’s $1 billion regional headquarters in Charlotte (up to 6,000 new jobs). Pratt & Whitney’s cutting-edge plant in Asheville (800 new jobs). Bandwidth’s 1,165-job expansion in Raleigh.”

“That leaders in disparate industries are drawn to locations all across our state proves North Carolina’s broad appeal to businesses across the world,” Emory said. “We will continue to tell the North Carolina story everywhere.”

The Site Selection ranking is the latest placing North Carolina among its top five states for business. North Carolina, for example, remains No. 1 on Forbes magazine’s Best States for Business list for the third year in a row. North Carolina is the only state  to appear in the top five every year of Forbes‘ best states study, which began in 2006.